Home / A to Z of wellbeing: a creative remedy for a post-pandemic world

A to Z of wellbeing: a creative remedy for a post-pandemic world 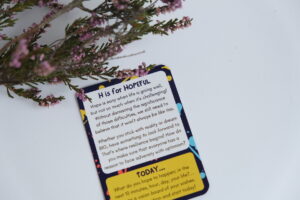 The A-Z Wellbeing Cards, developed in partnership between Jo Stockdale from Well Within Reach and IVE, have already made significant impacts on children and young people in nearly 100 settings. From primary and secondary schools to Youth Community Groups, from Sports Trusts to care teams, facilitators have witnessed the power of the resource to focus on the wellbeing of the child, following such a traumatic and difficult few years.

When the first lockdown struck in March 2020, IVE started to focus on how their Bridge work could have an immediate impact on the lives of children and young people most affected by the isolation and trauma of the pandemic. Following the success of Bags of Creativity, the Bridge team were considering further options when they began a conversation with Jo Stockdale, founder and trainer/consultant of Well Within Reach. Jo’s expertise in brain development in children, coupled with her ongoing work with families meant that she was the perfect partner for IVE. Indeed, Jo had begun a programme with the parents she worked with as soon as the first lockdown came into force, where she had sent out one wellbeing activity per day for them to action with their children. Jo gave them an alphabetical form and there began the genus of the idea that would later become the A-Z Wellbeing Cards. For instance, the ‘X is for Exchange’ card prompted opportunities for children to teach their parents a new skill, giving the children confidence at an extremely difficult time.

Jo and Verity Clarke, Programme Director of the Bridge, started working closely together on creating a resource that would make social and emotional growth integral to a learning setting, rather than as an added extra to be squeezed in, or as a planning-heavy intervention or programme. After further discussion, they decided to create the A-Z resource as playing cards. They wanted the resource to be fun, immediate and versatile, which also gave birth to the idea of the 4 additional ‘wild’ cards.

On each card there are 2 boxes. The larger box with a white background is primarily aimed at the adult leading the session. It explains the importance of the specific term. For instance, the ‘D is for decision-making’ card explains that when we give children opportunities to make decisions, we are in fact empowering them, and beginning the journey to a crucial life skill. In the second box, with a yellow background therefore, questions are there to be asked of the children themselves: what are you in charge of? How do you choose to trust yourself? 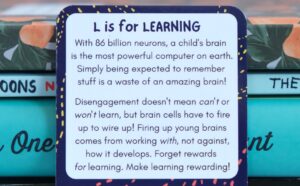 Versatility is at the heart of the resource. For instance, when Gemma Thornton, at Grimm & Co first trialled the cards with young people between the ages of 9 and 16, she could see the benefit of a physical activity connected to the cards. The young person would randomly pick a card and then be charged with creating a character of the word they’d selected. So, if they selected card number 14, and received ‘N is for Novelty’, they had to create a character that was the embodiment of novelty. This ensured that the young people fully understood the meaning of each word, and saw how the words could lead to action – the guiding principle behind the cards. They are not just there to provide useful words to be thought about, but to encourage activity and thus an active way of learning, to proactively and independently feel better during difficult times.

For Kirsty Bilton, Lead Facilitator for Mind Matters for Education, it was the power of the cards to generate discussion that first stood out. Always on the lookout for new ways to enable the young people to find their voice, Kirsty loved that the cards are activity-based, and the ‘B is for Beginnings’ card led to a completely new start to her session:

[The activities] started a prompt for some fun creative work For example we worked on ‘Hello rituals’ for beginnings, using actions, words, rap, dance moves, to create a greeting that was fun.”

The cards have already proved to make a profound difference to relationships in some settings. Pat Moore, tutor and freelance artist, used them in one-to-one activities in a school. The school had been working on the phrase ‘I believe you’ when addressing conflict situations. For Pat, the ‘V is for Validate’ card stood out, as what the child really needs is validation for their feelings:

I think it is right to communicate “I get it” and “I hear you”, rather than to be pushed into a corner and expected to say, “I believe you.” This card has helped me to clarify the difficulty of making my explanation clear to an adult with another perspective.

For Sarah Osborne, a Drama Practitioner, it is the presence of the Wild Cards that really stands out. For instance, in situations where young people are experiencing stress or anxiety, the ability to pause the workshop and use the ‘Let’s Get Curious’ card is extremely valuable. By asking the young people to look around the space and identify colours, shapes and sounds, she can bring them back to mindfulness and calmness. As the young people are aware of these, it also empowers them to grab a ‘Time to Reset’ card if they are feeling lost or confused. 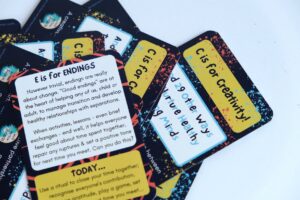 So far, of the nearly 100 settings that have used the cards, it is the enormous range of ways of using them that has proved to be their real power. Jo Stockdale loves the idea of hiding them around a space so the activities begin with a scavenger hunt!

However they are used, the A-Z Wellbeing Cards are an invaluable way of ensuring that children and young people’s mental health is at the forefront of creative practice; and equally valuable is the role of the facilitator in developing and re-inventing new and creative ways to use them.

Order your free pack of A to Z Wellbeing Activity Cards here.


Download the full case study as a PDF here