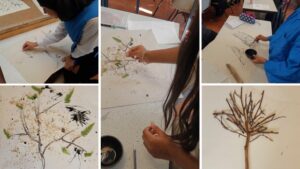 Film can be used so widely in the curriculum, from literacy to languages, science to soundscapes, music to mental health and wellbeing and history to human rights. There isn’t an aspect of our curriculum that can’t be fully supported by the resources provided from our link with Into Film and Artsmark.

Here at Belle Vue Girls’ Academy (BVGA) we have been using the excellent resources from national film education charity (and Artsmark Partner) Into Film for a few years and had initially set up a film club at BVGA, watching short films and using their excellent film appreciation resources.

When the pandemic forced schools to begin to teach remotely, we continued the film club activity virtually by using Twitter and watching films that were available free to air on platforms such as BBC iPlayer, ITVHub and All4. This idea was based on a weekly article published by Into Film which highlighted the best free to air films available each week. During the period when staff were teaching from home, it was clear that there was a growing use of existing video and animation clips and content needing to be created by staff.

Cinema has been described as A Machine That Generates Empathy, and thats what students and staff need more than ever as we return to our school community.

Once schools reopened on-site provision, the school leadership at BVGA and Arts Staff were determined that the Arts would play a central role in building back the schools’ community, identity and wellbeing. The decision was made to use Artsmark to act as a structure to support our whole school priorities of developing Confident Future Citizens, Confident Communicators and Confident Learners.

Following a skills audit with staff, it was clear that the greatest need in terms of Continued Professional Development (CPD) was around Filmmaking and Animation. Being based in Bradford – UNESCOs first City of Film and the home of the National Science and Media museum – using film as the framework for our Artsmark journey seemed like an obvious choice.

Into film provide an excellent mapping document which helps you to map out your Artsmark journey using their resources and programme which made the process of submitting our statement of commitment far more streamlined than perhaps we would have done otherwise.

Young people today are incredibly skilled in filmmaking and sharing videos. We want to build upon those skills and the access they have to a whole host of films and animation to help to develop their skills as confident future citizens.

Since starting back in September 2021, Into Film resources have been used in a Year 7 transition assembly, for Black History Month as part of our Personal Development Curriculum and we are taking the whole of Year 9 to watch a film as part of the Into Film Festival for free. Staff have been completing the excellent online training materials provided on the Into Film platform and we are currently planning some bespoke CPD to be delivered by Into Film for staff that have volunteered to become BVGA Film Champions. We are even going to have our annual Christmas Revue, which would normally be performed live on the last day of term, delivered as a pre-recorded event with filmed submissions by students in order to overcome the uncertainty around massed gatherings in light of the rising cases of Covid in the local area.

Glen Meskell, Programme Delivery Coordinator for the North of England at Into Film, commented: “At Into Film we realised how our programme could help schools on their Artsmark journey, whether that was by engaging lightly with our resources and programme offer, or by embracing a large amount of our programme. BVGA in our discussion have shown excellent leadership in placing arts and culture – and especially film – at their heart of their curriculum delivery and school improvement aims. Because our programme and resources are free for all state schools in the UK then it is great to see a leading school utilising the Into Film programme to achieve excellence on their Artsmark journey.”

We are all very excited at BVGA at what film and our partnership with Into Film can help staff and students achieve during our Artsmark journey.

If you’d like to learn more about Artsmark or becoming an Artsmark Partner, contact our Schools Engagement Manager, Aoibheann at aoibheann@weareive.org.