Congratulations to Future Star Harry Adams on his Arts Award

IVE were delighted to meet a very special guest last week when Harry Adams popped in to the office, to collect his Arts Award Discover certificate.

Harry won the Deer Shed Discover in a Day Arts Award logbook competition for his outstanding engagement and producing one of the best logbook’s we’ve ever seen. As well as collecting his certificate, he also gave us his top tips for getting the most out of visiting Deer Shed festival. 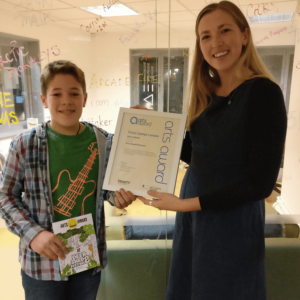 Deer Shed is an arts and culture festival, aimed squarely at families and Harry started by giving us a run-down of his highlights from 2017’s Deer Shed Festival 8, which had the theme of The Wilderwild, focusing on nature and wild spaces and their capacity to spark creativity and imagination.

For Harry the best activity there had to be the Wrekshop! This was an activity where children & young people could take apart old computers and printers and turn them into something creative. Harry also enjoyed seeing lots of bands, October Drift were his favourite, and listening to the many different musical genres on offer.

We asked Harry, what his top tips for visiting Deer Shed and his main advice was that it’s all in the planning. If you’re into your bands then make a plan of who you’re going to see and then schedule in all your activities, as there is so much on offer you want to be able to make it around everything.

Aside from his Deer Shed adventures Harry is busy in and out of school with lots of musical activities. Harry is working towards his Grade 8 Rock and Pop in Guitar, Grade 3 in Clarinet and is in a whopping 5 bands! These include, Saxenettes (a group of clarinets and saxophones), Soul band, Orchestra, Jazz band and his own band called ‘Backspace’. Backspace have been a part of Battle of the Acts, where they played at Guiseley festival and have even recorded an EP! Harry even sent us one of their songs which you can listen to below.

Harry spoke about how his school (Guiseley School) are actively engaging with their music and have really helped him to take part in such great ensembles.

As part of his prize, Harry and his family have won free tickets to Deer Shed 9, so we asked what he’s most looking forward to next year. Being a huge music fan, he answered that seeing all the new upcoming bands would be what he’s most excited about because they’re so inspirational to him as a musician.

We are really proud of all of Harry’s achievements and grateful to him and his family for popping by to chat to us. In fact, we’re so impressed with this young lad’s abilities that we’ve invited him to work with IVE on some of our upcoming projects. He’s going to provide us with some little designs for our next Arts Award resource that will be used at Deer Shed 9 and we’ve invited him to join our young person’s advisory panel.

If you’re interested in finding out more about Arts Award and how it can encourage and develop creativity and leadership then check out our Arts Award page.