We worked with pupils in St Matthews CofE Primary, Shire Oak Primary and Lawnswood School. The programme began with a whole day in each school led by us with amazing and much appreciated support from local industry experts, followed by seven sessions developing ideas in school before presenting their new ideas for reducing food waste to an Industry Panel.

The first day began with pupils hearing from Leeds City Council who gave an overview of food waste, what it is and why it needs to be reduced. Some of the shocking key facts young people learned included: 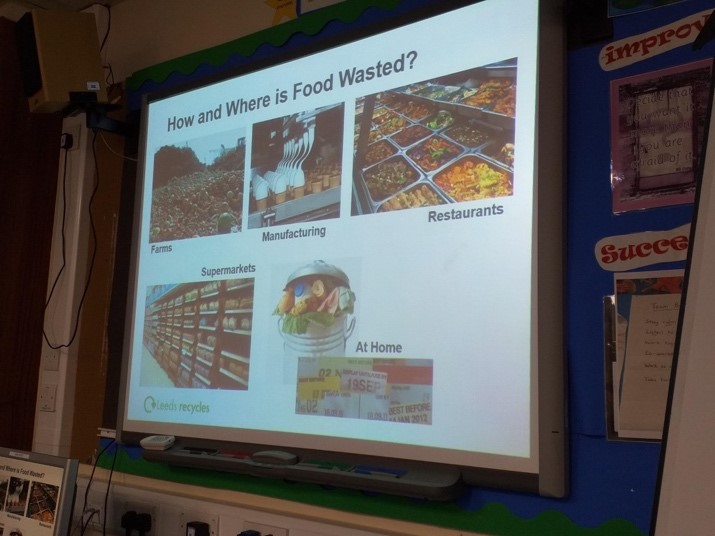 Young people learned about what is already being done to reduce food waste, including:

At the end of the presentation pupils were formally set the challenge of coming up with original and applicable ways to reduce food waste in Leeds.

The next stage of the Applied Creativity Lab was to develop young people’s ability to think divergently. We delivered a series of fun activities which required young people to come up with lots of different potential solutions for each of eight particular problems. 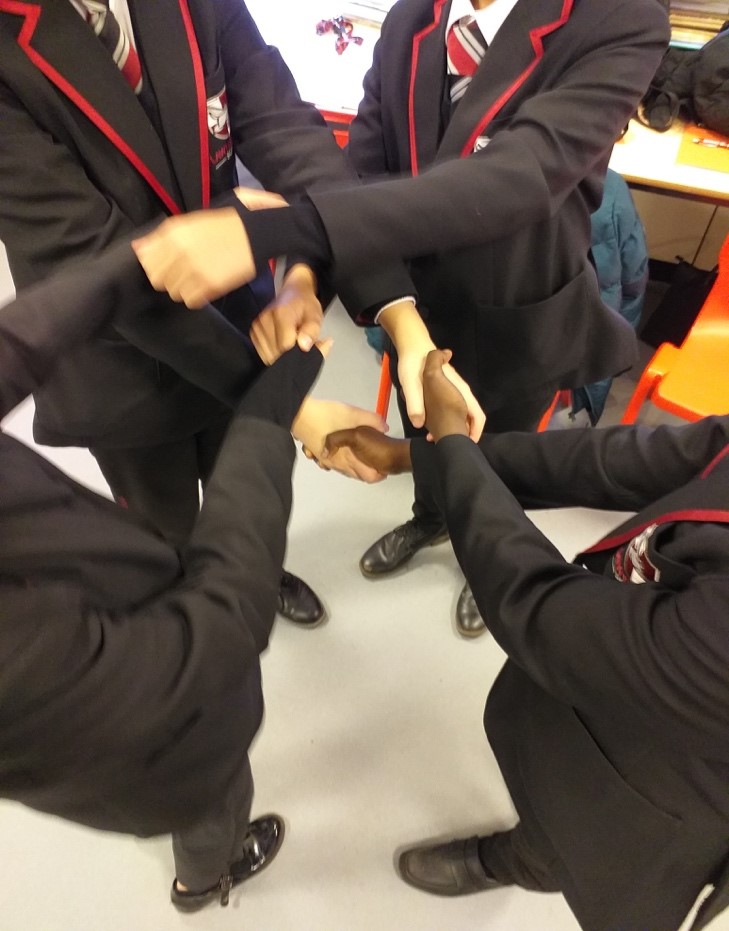 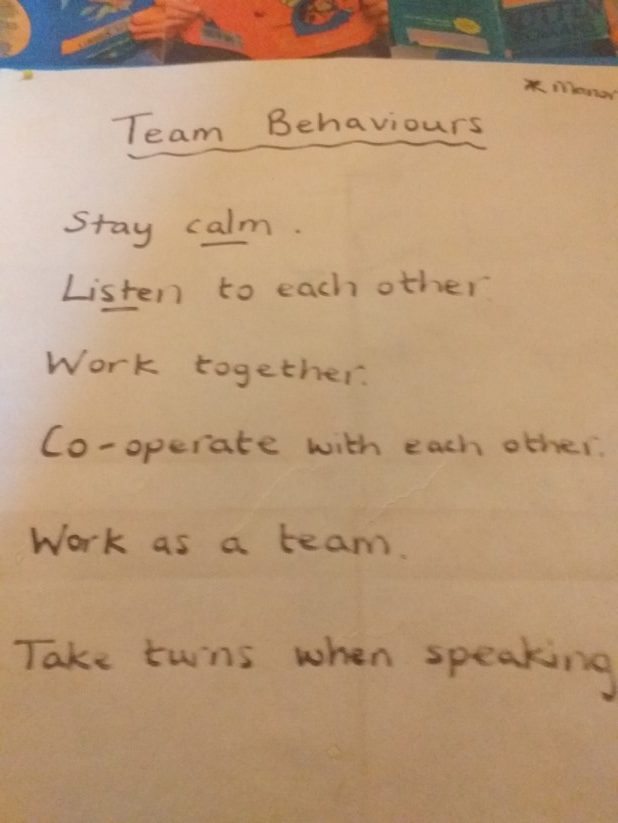 These activities give young people the opportunity to repeatedly practise and experience coming up with lots of possible solutions to problems as they think of them. After each activity we stopped to reflect on the skills and behaviours that helped them solve the problem. These skills were then built up as a list for the group to constantly refer back to for the duration of the project.

Young people then heard from a variety of industry experts, including Leeds Food Partnership, Magpie Creative Comms Agency, Rethink Food, the Harewood Food & Drink Project, Waste Food Solutions and Food Revival. Each expert gave a ten-minute presentation on the food waste issue from their perspective. Pupils made notes and learned about some different ways in which people are already working to help reduce food waste and about what they might need to think about if they were going to plan a campaign. 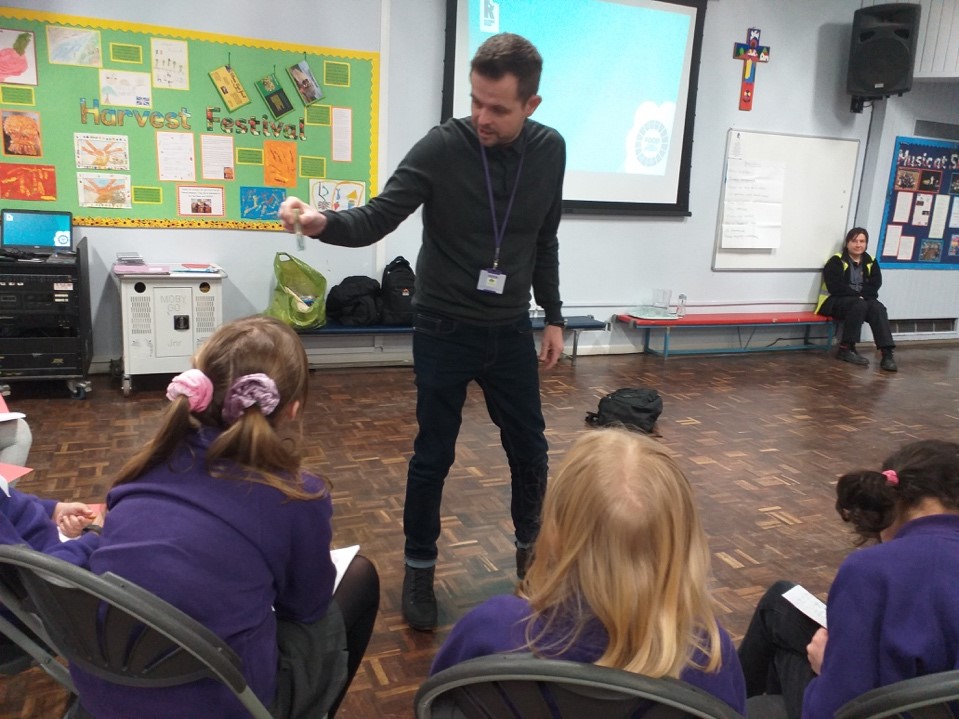 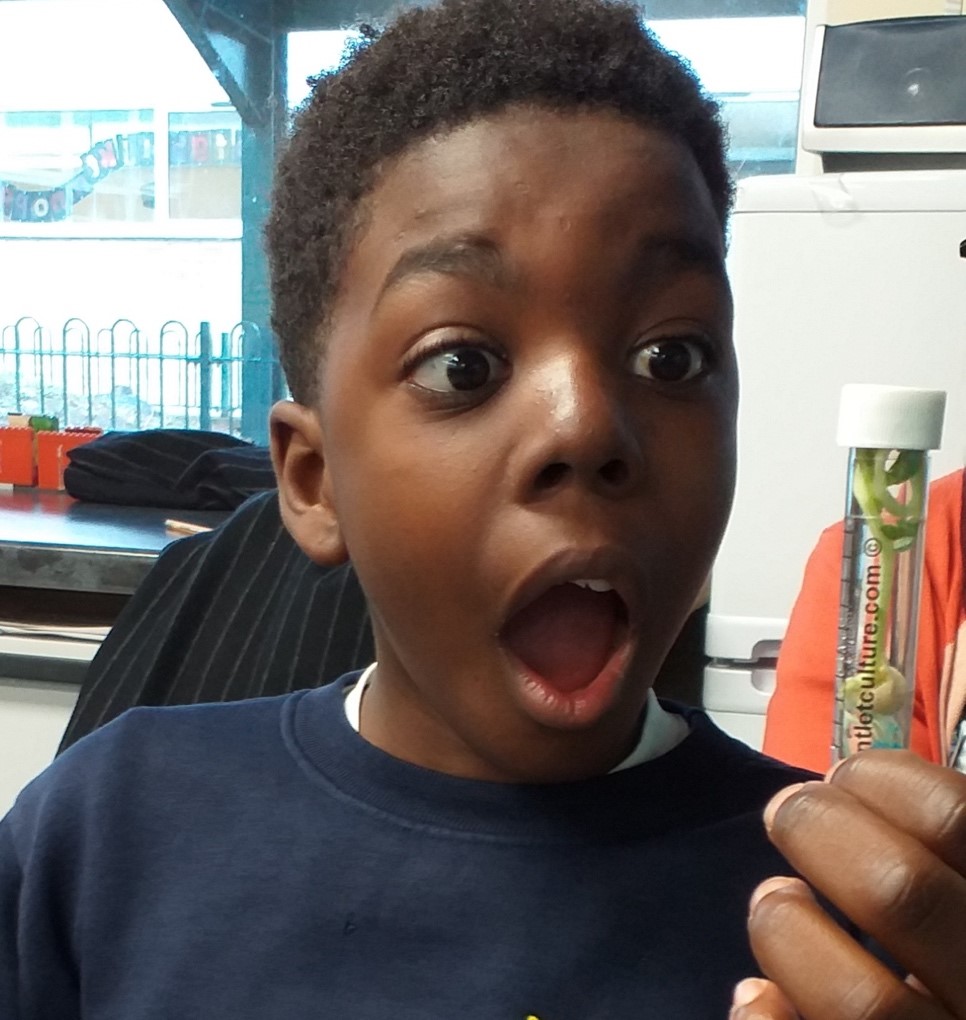 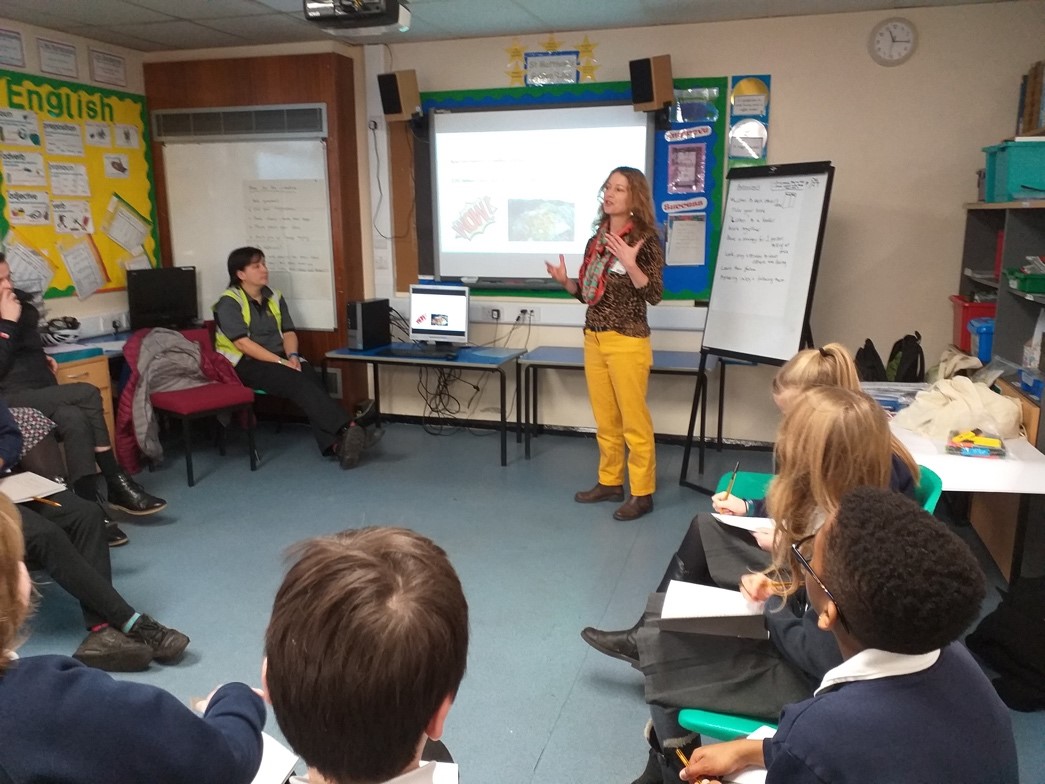 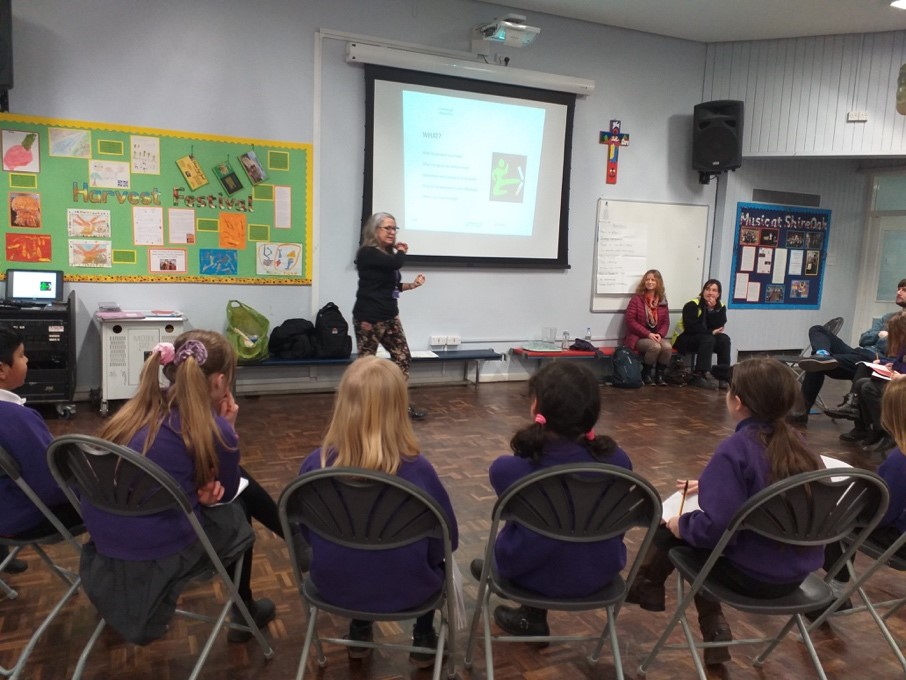 After lunch young people were tasked with resolving five Convergent Thinking challenges. In small groups they were asked to come up with their most effective solution to each challenge having been given certain information and/or materials.  Before each challenge they were reminded of the helpful team-working skills and behaviours that they had identified from the divergent thinking activities in the morning and then set time limits to come up with a solution in their group. 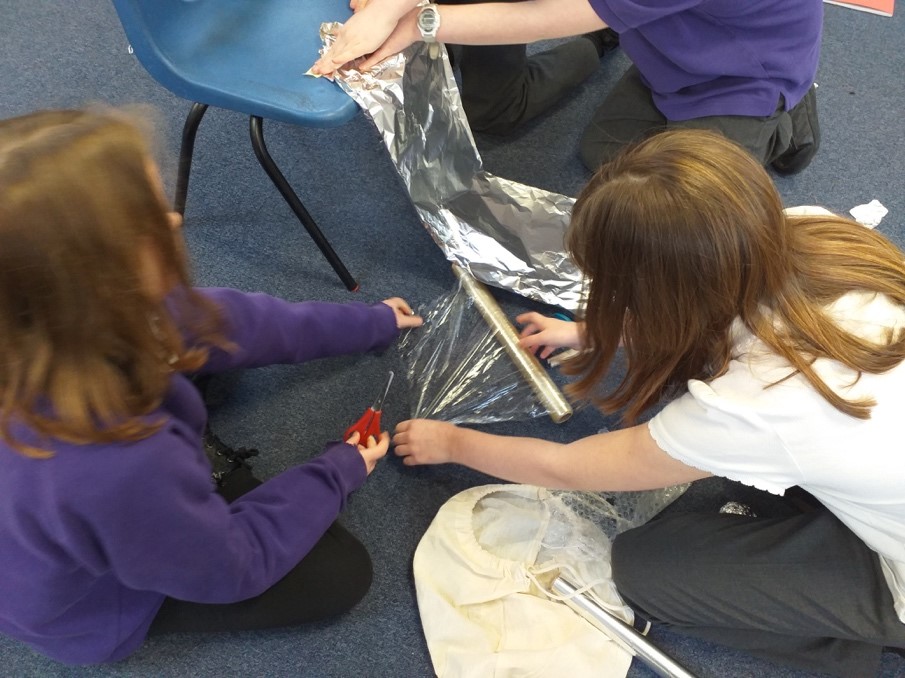 Both the Divergent and the Convergent Thinking activities are the mainstay at the outset of the Applied Creativity Lab process.  They help young people recognise that they already have the skills and know how to apply both skills and certain behaviours to come up with innovative solutions to the challenges set in the session. Once practised and mastered on the activities on the first day they were then ready to move to the next stage of applying their newfound creativity skills to find innovative solutions to the real-world challenge of reducing food waste.

The next step saw us working with the young people for an hour a week over seven weeks on the Ideation Process. Groups started by mind-mapping as many ideas as they could think of for reducing food waste – all the while applying the skills and behaviours they had learned and mastered on the first day’s training. 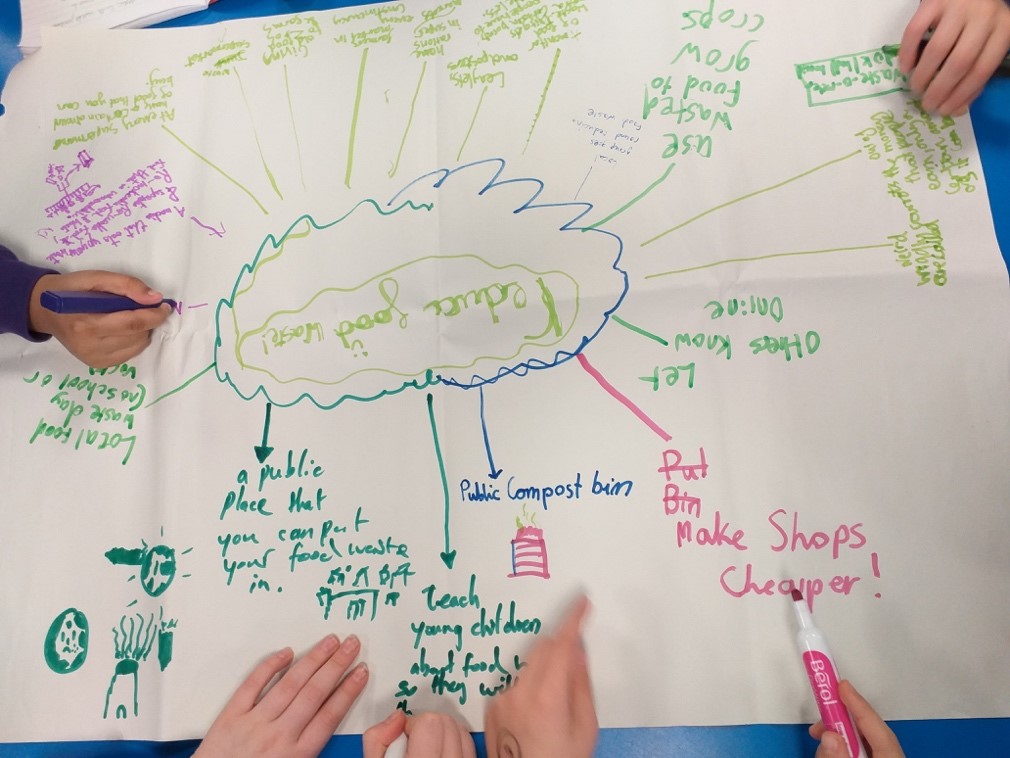 Using a structured Synectic’s-based approach, session by session they then whittled their ideas down to one per group – focussing on their most innovative and applicable idea. 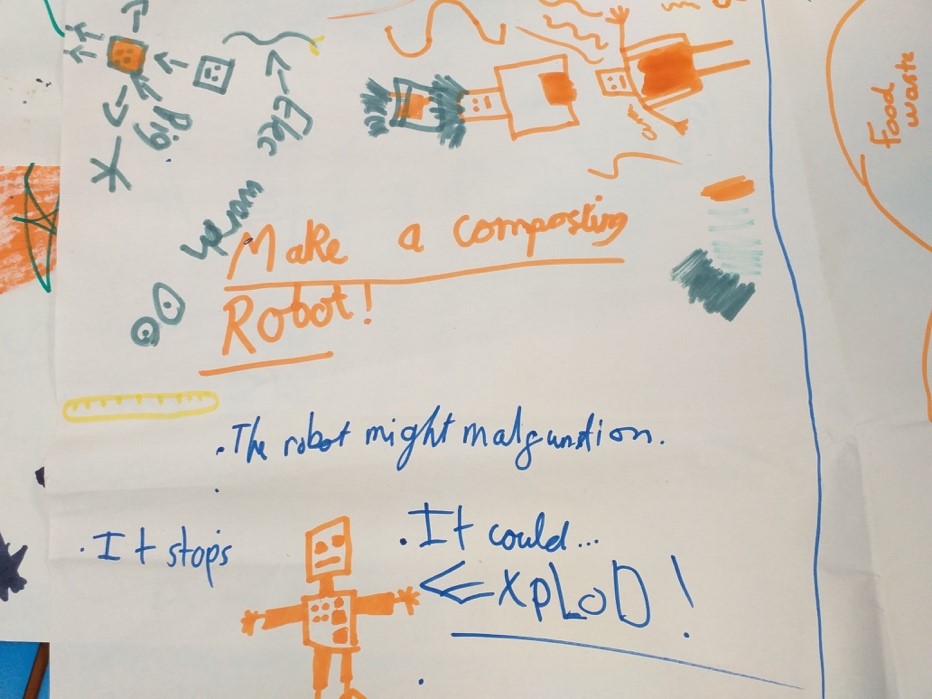 They then spent developing their final ideas up in as much detail, researching existing similar ideas, considering costing, product design, thinking through how their ideas might work and so on. Once they were happy with their concept and product they then began work on their presentations. They scripted and rehearsed and were all set to present at The Hovels on the Harewood Estate on 26th March when schools were ordered to close due to the Corona Virus outbreak. Not to be deterred we asked the Industry Panel who would have listened to and watched their presentations at The Hovels if they would read and look at their ideas by email instead. Thankfully the majority agreed!  Each school submitted what they could before and during closure and their ideas and a scoring/comments sheet were sent to representatives from Leeds City Council, Harewood Estate, Zero Waste Leeds, ASDA & IVE for assessment. The Industry Panel really enjoyed reading the nine final ideas, looking at drawings, scripts and drama-based presentation videos that the schools had submitted. The nine ideas were as follows: 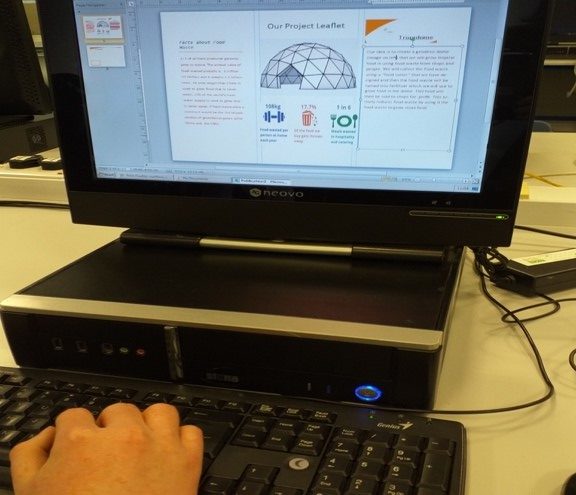 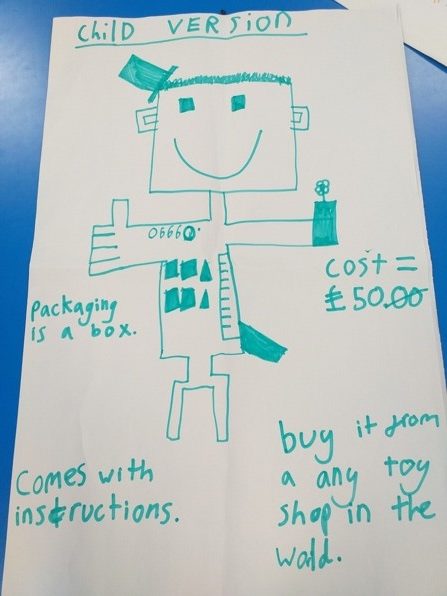 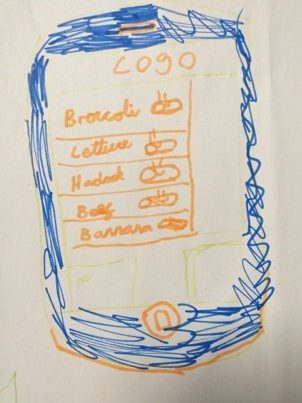 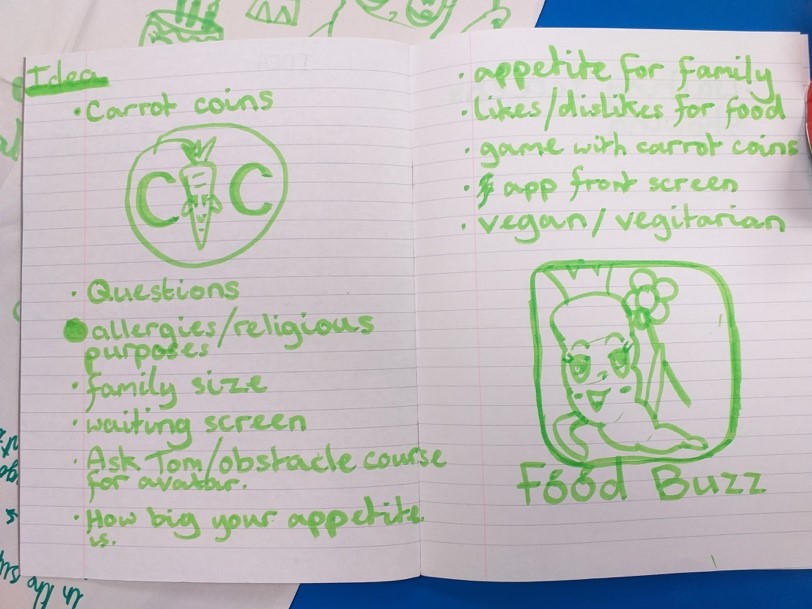 The Industry Panel considered all of the ideas and fed back their scores and comments which will be fed back to the schools for sharing with pupils. General comments received included:

‘All of the ideas are really great. They’ve obviously all put a lot of thought and energy into bringing the ideas to life. I think we have a few budding entrepreneurs in our midst!’

‘There were some very interesting and fun ones in there…. I think the Food Waste Day idea is a good one and I think could be achievable if we involved Catering Leeds and our comms team but subject to their work priorities and whether they think it could work.’

The panel’s specific comments about each idea have been fed back to the young people via their school newsletters to parents so they at least have some closure on a project that they spent so much time and energy working on. Whilst it was a real shame that they didn’t get to physically present their ideas to the Industry Panel in person in the end they can at least now see that their ideas were given full consideration and can read the overall comments and outcomes.

Overall the Industry Panel comments and scores indicated that the most innovative and applicable idea that was most likely to reduce food waste was STOP THE ROT from Shire Oak Primary School. STOP THE ROT is an app that alerts you when your food is about to go off, so you still have time to make something with it. STOP THE ROT allows you to scan your food’s use-by date (via barcode or QR code) as you put it away in cupboards/fridge after purchase. It then alerts you one week before the food item is due to go off, providing you with recipes to make using the combination of imminently out of date food. (It will require the user to swipe already consumed food off the list of food on the screen leaving just the food that is about to go off in the next week – just like you swipe/delete old messages off from Messenger and other apps). Feedback from the Industry Panel for STOP THE ROT idea included:

‘Excellent product name! Really catchy! This sounds like a really good way to give people plenty of warning before their food goes off and will minimise wastage at home. Using existing technology like bar or QR codes will help keep costs down. It would be even better if it could be linked to scanners in supermarkets, so you only had to scan things once, otherwise a pain to get home and have to scan everything again. I like the idea of giving people recipe suggestions as well. I could see this being useful in restaurants and cafes as well to help with stock control.’

‘I think this simple idea has real possibilities in terms of development. Swiping food bar codes/QR codes at point of purchase (or putting away in the fridge) to provide food freshness alerts and tasty meal suggestions, is, in my opinion a goer. I’m in!’

‘What a great idea for an app, and one I could certainly make use of. I love that it notifies you not only of when food is due to go off but also give ideas and recipes on how to use up the food. You’ve also obviously put a lot of thought into how the app will work and what it will look like as well. Great idea :)’

‘I think this is a really good idea! It responds to a real need as I think people generally waste so much food from their fridge. From a personal angle food gets to the back of the fridge and then gets forgotten about and then goes past its sell by date and then thrown out….I think an app could be made fairly easily which would include a scanner which links to a supermarket’s library of bar codes to identify the particular food…..If it was a free app I think a lot of households would use it…..maybe a grant could be applied for from government or perhaps supermarkets to produce it?’

‘There are a number of aps out there re food waste, but this is obviously still the ‘on-trend’ thing to use especially for busy people. An inventory list of your cupboards with date codes attached is a good idea. The app wouldn’t be too difficult. Currently barcodes don’t usually have date codes embedded (the industry would love that and have been working on it for years, but it would probably mean a different and maybe longer barcode). With some simple tweaks ie. the addition of photo and manual input of the date this could work, and alerts could help reduce food waste.’

Further support for the development of this idea, from Shire Oak Primary School, will now be sought by IVE to take the next steps to develop this app as soon as possible. If anyone reading this would like to offer support to help turn this idea into reality please contact IVE – hello@weareive.org in the first instance.

IVE will be offering Applied Creativity Labs to schools, school hubs and family groups whilst in Lockdown from June 2020 onwards. If you would like to take part please visit: https://weareive.org/ive-studio/applied-creativity/