Stemming from an idea at their Artsmark Development Day, Gomersal Primary established a pupil led Arts Council which, together with a commitment from the whole staff and governing body has transformed the school.

In March of this year, pupils from Gomersal Primary School went to Parliament to voice their thoughts about the role of the Arts in education. They spoke at an All Party Parliamentary Group (APPG) for Art, Craft and Design, and eloquently argued the case for an equitable and consistent arts-rich curriculum. Some of the MPs were moved to tears. Head teacher Melanie Cox and specialist Art teacher Mandy Barret could not have been prouder. It didn’t happen by accident. 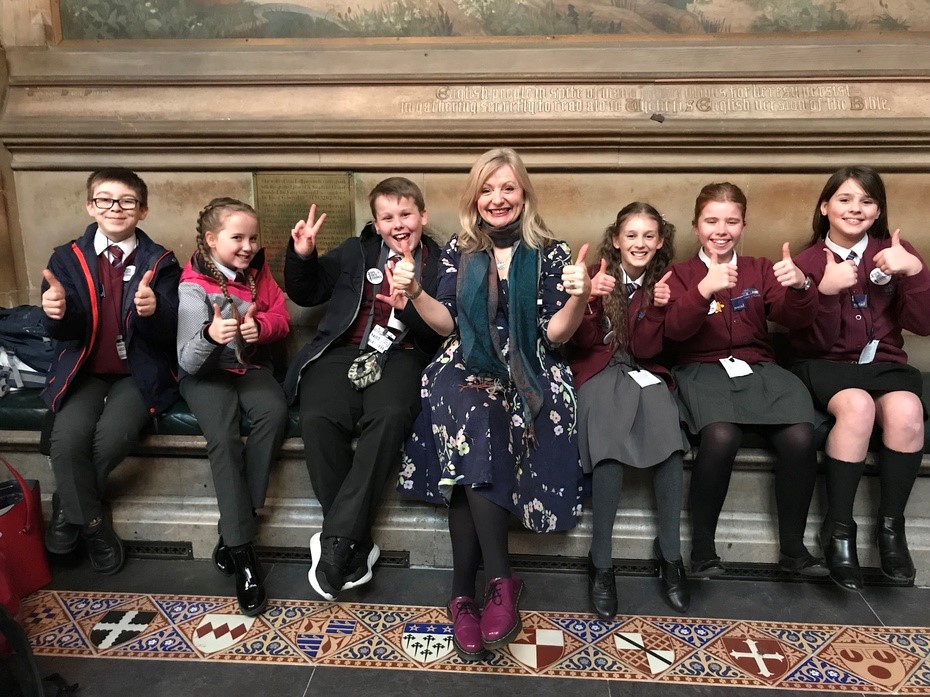 It emerged as a result of years of passionate and focused work from Melanie, Mandy and the whole staff and governing body at Gomersal. The school has undergone some tough times, including a Requires Improvement judgement from Ofsted in 2016. This makes the clear commitment to the arts even more surprising and delightful. Where many schools would pour all of their focus onto English and Maths lessons, Gomersal knew that they had to focus as much on the development of the whole child, as on the core subjects.

Gomersal Primary moved to a new building in 2013, a former Middle School which contained an art studio. Mandy, a classroom teacher at the time, worked in the studio on a couple of occasions but at the end of the year she had a meeting with Melanie. Melanie knew that the school’s art provision was not where she wanted it to be so offered Mandy a 2-year art specialist role. She would teach art to all KS2 pupils whilst their class teacher was doing PPA. EYFS and KS1 pupils accessed the specialist teaching on a rolling programme. Within months the school’s displays were transforming the school and Melanie could see the impact on behaviour and engagement across the school. 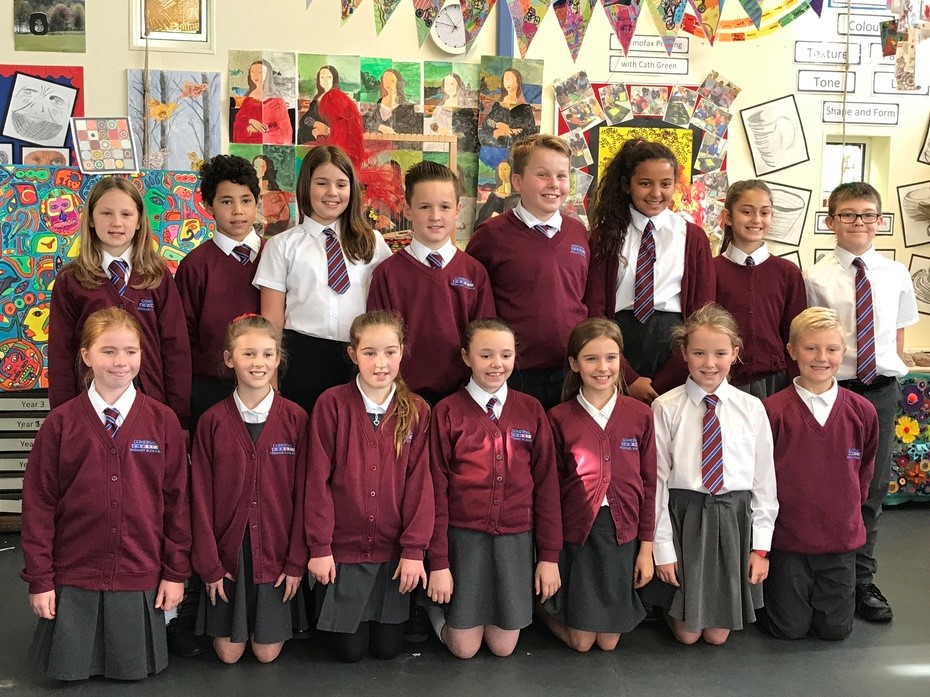 At the end of the 2 years, Mandy’s role was made permanent. Now all students have a rich and diverse Art experience, with clear progression and tracking built in. Each Year 6 student completes an Arts Award and this is presented to them at the same time as their SATs result. This shouts a clear message: that the arts are as important at Gomersal as Maths and English. The school looks and feels vibrant and exciting and the Arts Council members play a significant role in extending and developing this.

Mandy was determined to show from the start that the Arts Council would have a real status in the school, so she requested formal written applications from anyone that was interested. In the first year there were 14 applications and all 14 made it onto the Council. Interestingly all of these were girls. They met fortnightly and very quickly established themselves as essential members of the school’s fabric, volunteering for anything and everything that staff needed assistance with. However, the Arts Council was also there to address real issues in the school and to examine how and why the Arts are important. Suggestion boxes for art, drama, dance and music were established in the school’s foyer and the Arts Council would discuss which were most valuable and how they could be implemented. 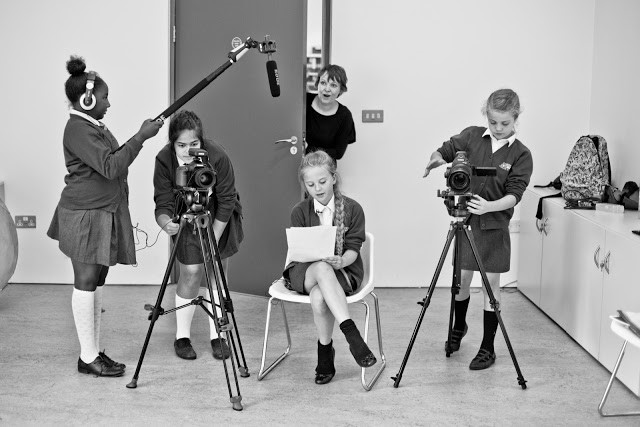 Soon, word got back to the Arts Council Collection (ACC) who invited the Gomersal council to Longside Learning Centre at Yorkshire Sculpture Park to look at the artwork belonging to the ACC. A videographer filmed the morning’s tour and learning talks and then trained the 14 young people to use their equipment. In the afternoon, the Gomersal Arts Council filmed and “grilled” Arts Council England on their roles and responsibilities. By the end of the day, the council had been taught how to work with exhibitions and how to look at sculptures. They took this information back to the school and shared it with their peers. Interestingly, one of the Gomersal Arts Council’s current ambitions is to raise enough money to buy in work from local artists so that all pupils can have access to this art, not just those lucky enough to get to a gallery.

They are now in the second year of the Arts Council at Gomersal. This year Mandy received 60 applications and lots more boys applied. Mandy feels that many more were prompted to apply this year, as they realised that this was a dynamic group, experiencing exciting interactions with adults, and one that actually made a difference. The council members genuinely shape the direction of the school and, even more excitingly, are now starting to have their say on the future of education.

Mandy started an online blog of Gomersal students’ work ( http://gomersalprimaryschoolart.blogspot.co.uk/ currently with over 50,000 views…) and it had some influential admirers. One of them was the NSEAD (National Society for the Education of Arts & Design) president, who invited Mandy and Melanie to London to speak at an APPG in May 2016. Melanie used her 13 minutes to advocate for how they were using all of the arts at Gomersal to improve whole school standards, whilst also meeting the needs of the whole child. When the school went into Requires Improvement, core results were below the national average. In the monitoring visit last year, inspectors were impressed commented on the improvement in the standards, and also on the creative side of the school. Melanie is under no doubt that the strengthening of the arts has been a significant driver in this improvement. 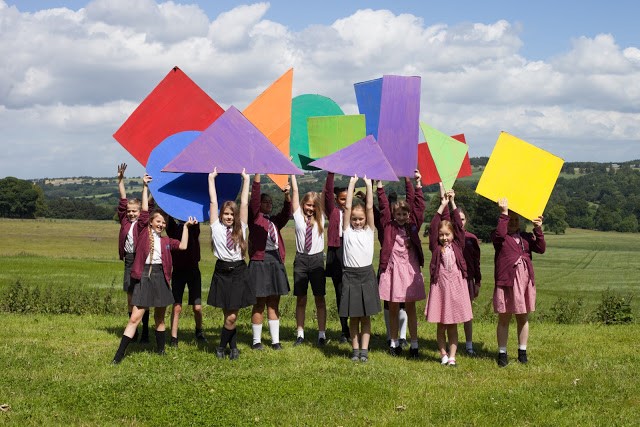 Meanwhile, the Gomersal Arts Council was going from strength to strength. Local MP Tracy Brabin heard about their brilliant work and this time it was the students themselves that were invited to speak at the APPG. 6 of the 15 members were met at Parliament by Tracy and were passionate and articulate before even entering the meeting. At the meeting they were particularly keen to highlight how uneven provision of the arts is in schools and that it should be a right, not a school by school lottery, to have outstanding arts provision.

The Arts Council was set up, in Mandy’s words, to “give us a vehicle by which to strengthen the arts”. It stemmed from their Artsmark Development Day and they have remained committed to including the pupils in their school improvement journey. Next up is a radio station, initiated by the school’s relationship with a local DJ, and it is now to be resourced, decorated and budgeted for with help from the Arts Council. The council members will also be the first to be trained in how to use the equipment and will then act as ambassadors in training up other pupils. They have created a badge-making business that has already raised £320 and the ideas keep on coming. In short, the Gomersal Arts Council is here to stay, and means business.

You can read more about the Gomersal Art Council’s visit to Westminster here. If you’re interested in becoming an Artsmark school and seeing how you can improve the quality of arts and cultural education in the UK then more details can be found on our Artsmark page.