The Voice Project, co-funded by IVE, studied ‘the voice of the child’ relating to Arts & Culture in Doncaster.

As a result of this project, a report was produced. This report outlines the intent, methodology, conclusions and recommendations of the Voice Project. Implemented by Doncaster Metropolitan Borough Council (DMBC) and joint funded by DMBC and Cape UK (now known as IVE). The Project was brought to life by the Doncaster Culture Education Partnership (DCEP) to give a voice to Children and Young People in the Doncaster Borough.

While this report is specific to Doncaster, many of the issues it identifies, along with the recommended solutions, are applicable to arts & cultural organisations operating nationwide.

The Voice Project has been designed as a tripartite study and this report covers the first phase of delivery. The first phase of the project looks specifically at 14-17 year olds and examines the current level of provision and youth engagement with Arts & Cultural activity in the borough via a two-pronged consultation exercise. The overall project was produced and shaped by the DCEP, but the consultation elements have been written by young people for young people.

The project was purposely designed to gather both qualitative and quantitative data in order to provide a comprehensive overview of the current level of provision and engagement, and highlight any gaps in provision. The results will inform phase 2 and will provide the basis for a set of recommendations from the Culture Youth Forum.

The two objectives of the project were:

The Project was simple in its design:

Three schools were selected in which to target young people to be part of the study in catchment areas identified as having low levels of engagement. Consultation with the young people was then split into quantitative and qualitative strands:

Quantitative – An e-questionnaire was designed and sent to the three schools for their students to complete in order to gather a larger data set.

Qualitative – Identified young people from these three schools would be given the opportunity to attend free ‘taster sessions’ of identified arts activities across the Borough, and their feedback would be gathered.

It is clear from the consultation that young people are, on the whole, not aware of options available to them regarding the Arts & Culture offer in Doncaster. Previously completed mapping work from 2016 shows that the further outside the centre of Doncaster you go, the less there is on offer. It showed a large amount of dance activity with a lot of variety and a growing number of private theatre schools such as: Cast Youth Theatre, Pauline Quirke Academy and Doncaster New Youth Theatre. There are opportunities for music making, however, there was little by way of arts & crafts or photography & film, which scored highly as activities young people said they would like to do.

Darts (Doncaster Community Arts) has a fantastic range of free activities on offer at The Point throughout the year. However, many young people are either unaware of these sessions or have difficulties with access relating to travel and timing.

There is most definitely an element of inconsistency with the offer; a number of projects are only funded for set periods of time, such as those delivered by Breaking Beats at the Tom Hill Centre. There is also inconsistency with the amount of information available; some activities have little information available online e.g. Conisbrough Youth Theatre and some are only on Facebook, so there is some work to do relating to increasing visibility.

Other barriers raised to engagement with arts and cultural activity included issues related to timekeeping, location and transport e.g. activities are too close to the end of the school day or too late after the school day to be practically accommodated in an evening. Similarly, many children surveyed felt that the burden of homework and existing activities did not leave any time to pursue arts and cultural interests. Activities requiring transport often necessitated multiple bus trips and lengthy round trips, exacerbating the issue. Many also raised an issue of safety at coming home late during the winter when it was dark.

Social pressures such as bullying were raised as well as an anxiety about attending a new space without a friend group. Going alone into a strange new club was seen as frightening and off putting.

Lastly, cost was identified as a barrier, both the fee to attend as well as transport costs and equipment (e.g. shoes and costumes for dance).

During interviews, the Culture Youth Forum identified that young people who had taken part in Arts activities when they were younger were more likely to re-engage later on. Issues relating to engagement become more complex as young people reach secondary school age due to peer pressure, homework, interventions and general coming of age so laying good foundations at primary age could be key.

After School Club Provision – ‘Go to them’

Although the identified issues are multifarious, many of them can be solved at once by taking provision into schools by way of after school/holiday clubs. This would solve problems with issues relating to travel (costs, time, distance, and safety), timing (schools could schedule provision as to not clash with interventions), and other problems such as anxiety about attending on your own or not knowing anyone. The hiring of space and equipment may be more readily available and payment for provision could be negotiated with schools.

Think harder about how and where to promote your offer to young people.

Young people need to know about activities available to them. As communicated by young people most effective ways to do this are: Social media, through school (assemblies, dashboards and teacher recommendation), Youth Centres, Libraries, posters, handouts and leaflets. The method currently not being utilised to its full potential is through school but it is not only the channel of delivery that can be improved and there must be some modifications to the message itself.

The benefits of Arts activities aren’t always translated well in promotional materials and the discussions had in the group interviews with young people highlighted this brilliantly. As well as enjoyment or ‘art for art’s sake’, it is important to highlight the ancillary benefits such as:

Money shouldn’t be a barrier to experiencing the arts. Scholarships and bursaries should be made readily available and advertised so that young people with the talent and enthusiasm are not prohibited because of cost. Every child should have the opportunity to experience live music or a theatre show, create visual art or take part in dance or drama activities at some point. Doncaster Music Education Hub is doing an excellent job at this with large scale opportunities for schools in Doncaster like Opera North Big Sing, BBC Music Day and RPO Resound at the Dome but more can be done across disciplines.

The DCEP needs to forge strong links with schools so that they can work together to support children and young people’s engagement with the Arts & Culture, but better support from staff (teaching and leadership staff) in schools is crucial for change. They need to work with each other to develop strong lines of communication and links for collaboration. The DCEP need to secure funding to do further research, pilot classes in schools, and build on good practice. 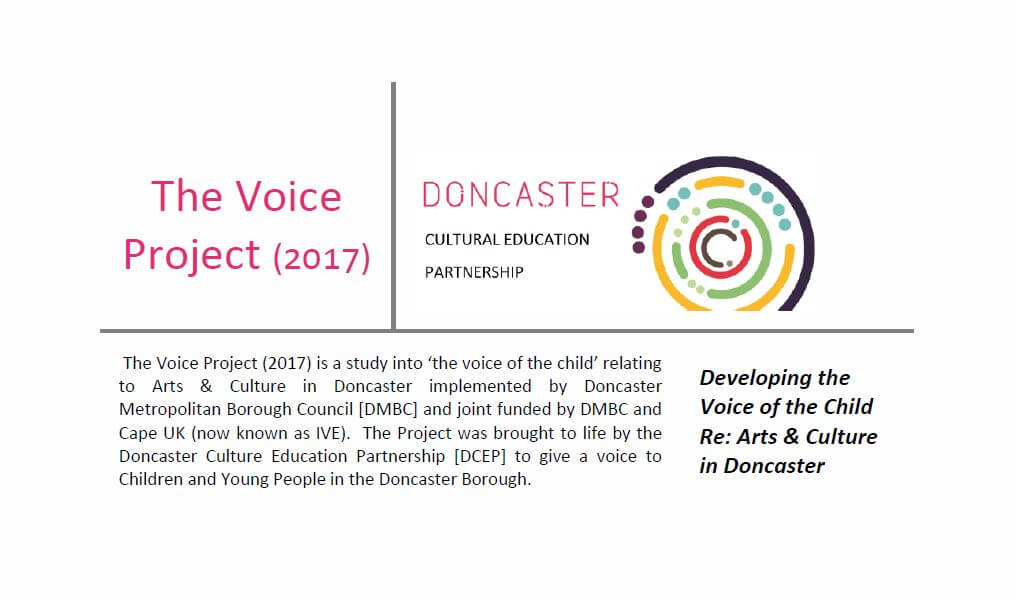