IVE would like to welcome Leeds business legend Jonathan Straight as the newest member of our board of trustees.

The entrepreneur behind the pioneering recycling business Straight plc will be a familiar figure to many Yorkshire business people. With his distinctive sense of style, including signature waxed moustache and a collection of spectacles currently numbering over 300, he certainly stands out from the crowd and is often mistaken for a rock star or artist, rather than a successful recycling bin manufacturer.

The signature look is part personal marketing brand and part self-expression and just one aspect of a lifelong passion for creativity. Since selling Straight plc in 2014 Jonathan has become an increasingly prominent member of the Leeds art world, sitting on the boards of a number of charities, including The Tetley, as well as developing his photography skills and exhibiting his work in venues such as the White Cloth Gallery.

That passion for creativity though, was always a part of Jonathan and he recognises that it was crucial in the success of his business.

“About 25 years ago, I founded a business which I then built up and ran for 21 years. In my view, the whole exercise was one giant creative process,” Jonathan explains. “I believe that to create is part of being human and in particular entrepreneurs should consider themselves to be creative and should embrace this element of their work.”

“For example, one of the early differentiators we used at Straight Recycling was the use of caricatures of myself as a marketing device. It got the company noticed and it was something none of my competitors would have been able to do. 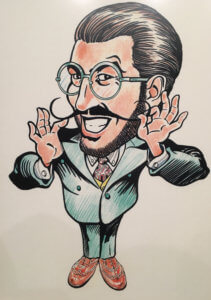 “We were also known for creative marketing campaigns and exceptional exhibition stands. The one that stands out in my mind was for a campaign called The Art of Recycling where we created an art gallery for our exhibition stand and commissioned canvasses in the style of famous artists but featuring our products.”

“Creativity is a crucial skill in business, particularly entrepreneurship, which helps to build new and ground-breaking businesses. It’s an element of innovation which makes businesses immune to competition and it’s part of a vision of the future which will allow a business to pursue a structured journey forward.”

“But I think there is this incorrect idea that there is a divide between people who consider themselves or are considered to be “creatives” and everyone else. I believe everyone is inherently creative – it just needs to be brought to the surface. I think the problem is cultural and starts at school, not enough children are encouraged to be creative and this is to the detriment of education overall.”

“I’m eager to begin working with IVE because they share my views on creativity and work to promote creativity in a variety of situations and for the benefit of those who receive its intervention. This is something I wholeheartedly support and I’m excited to start learning more about how the organisation works and, as with all my roles, making a real difference in the world.”

We’re genuinely excited to have Jonathan join the team, he brings a wealth of expertise and success to the board along with an enthusiasm for creativity that matches our own. That, and he makes board meetings much more colourful!

We asked him if he had any tips for young entrepreneurs or aspiring moustache enthusiasts.

“Don’t let people talk you down but listen to sound advice from someone who has been there.

Get on and start the business, learning on the job is the best way, but find a good mentor if you can who can help you navigate the journey.”

“Don’t be afraid of giving some of the cake away to get what you need – part of a very valuable cake is better than all of one worth little. Never give up!”

“As for moustaches, mine is washed out every night, but once a week I give it a rest. It’s waxed with two different waxes – a structural bottom later and a tinted top layer. It doesn’t take very long to do and it has been a real ice-breaker and conversation starter for the 25 years or so I have had it.”