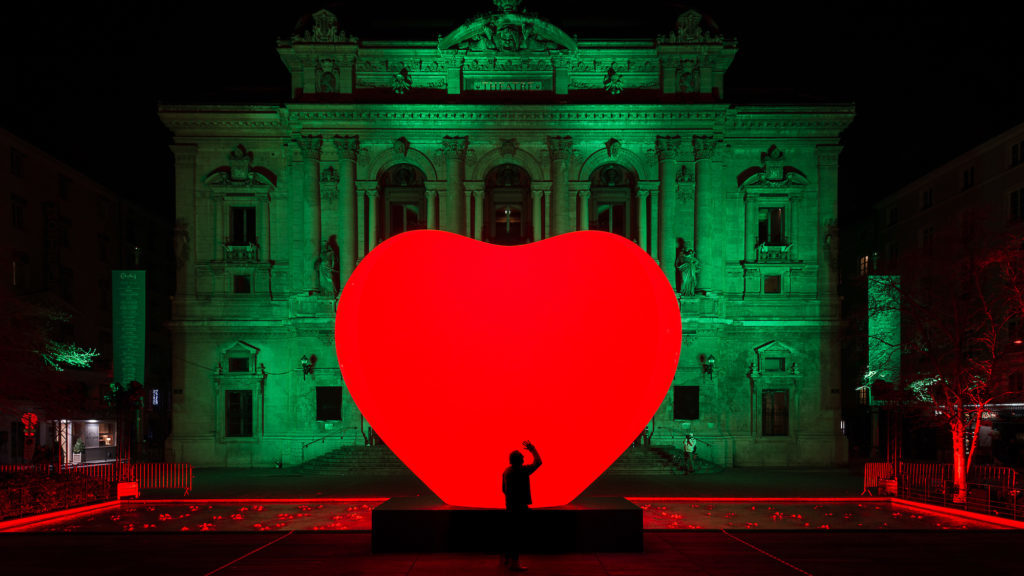 IVE’s Caroline Courtney tells us why she loves the event:

I’m volunteering at Light Night this year for the second time after attending every October since 2015, and each one has been a unique experience. Not many people know that Leeds was the first place in the north making neon signs, as early as the 1940s, so it’s an event that has much more to do with Leeds heritage than people realise.

When it first opened, the West Yorkshire Playhouse once boasted the longest neon sign in Europe!

My favourite previous installation was the Virtual Playground, developed by Thrill Engineer, Professor Brendan Walker, which was in Leeds Train Station last year. It’s an interactive virtual reality experience where members of the public sit on playground swings with a headset and headphones on, exploring alternative universes that respond to the speed of your swinging. Working on this amazing piece of art was such a fab way to get talking to the enormous range of folk who come to Leeds’ Light Night events. It’s a real highlight of the city’s calendar.

I’ll be sure to bring lots of layers. On the Friday night last year, it rained solidly until about 11pm! That said, there are lots of things happening inside too, as the festival takes over lots of the city centre and loads of spaces open up way past their usual opening hours.

I’m excited to see ‘With Love…’ outside the front of the Town Hall! It’s a giant heart made by French artist Franck Pelletier that invites couples (friends, romantic or otherwise!!!), takes the pulse of you both then plays your ‘love song’ that goes with your BPMs! Then I’d recommend checking out the crypts underneath the Town Hall which always have something super interesting. That’s where the old Victorian cells of the Town Hall are and they aren’t always open to the public – so it’s a chance to see more of our city’s history and heritage.

Installation by Museum of the Moon. Photo by Anne-Louise Quinton>

Collaborating and co-producing with Space2 and Allerton CE Primary

Space2 and Allerton CE Primary have worked together for 14 years to co-produce annual whole-school, multi-media arts projects for Allerton CE’s pupils on themes…

Year 5 pupils at a Bradford primary school, IQRA Academy, which is part of the high-performing Feversham Education Trust (FET) are celebrating today having…

Are you an education or community setting, working with children and young people who experience disadvantages and want to make a meaningful difference through…