Never Such Innocence brought their Songs of the Centenary roadshow to RAF Leeming, giving school children in Yorkshire an opportunity to engage with history through poetry and song. IVE’s Sarah Mumford recounts the event.

RAF Leeming welcomed 5 schools to their base for a day of learning that combined creativity & the arts with opportunities to engage with heritage, meet academics and collaborate with professional artists.

Organised as part of the Never Such Innocence 2017/18 competition, each of the schools that attended did well to make it to the fairly remote airbase on a day with the heaviest snowfall of 2018 so far! 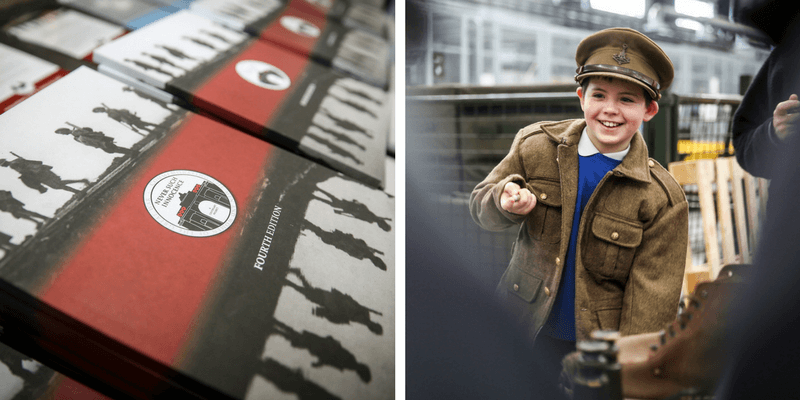 Never Such Innocence (NSI) is a registered charity aiming to ensure young people nationally are inspired, informed and included in 1914-1918 centenary activities. NSI is dedicated to educating young people about the First World War, its impact and legacy, through creative means including poetry, art and more recently, with Partnership Investment support from IVE, songwriting.

Group Captain Andy Cooksley welcomed one and all to the Signals Patrol hangar and The day began with a series of activities organised by the RAF, Richmond Castle and Green Howards Museum designed to raise the pupils’ awareness of events during World War 1.

Air Commodore Simon Bostock Deputy Lieutenant for North Yorkshire, then welcomed Ainderby Steeple Primary pupils from Northallerton who read On the Wings of the Morning, a poem by Jeffery Day. Appleton Academy, from Bradford, were then introduced by Lady Lucy French, NSI CEO, who read their own individual entries to the Never Such Innocence poetry competition. 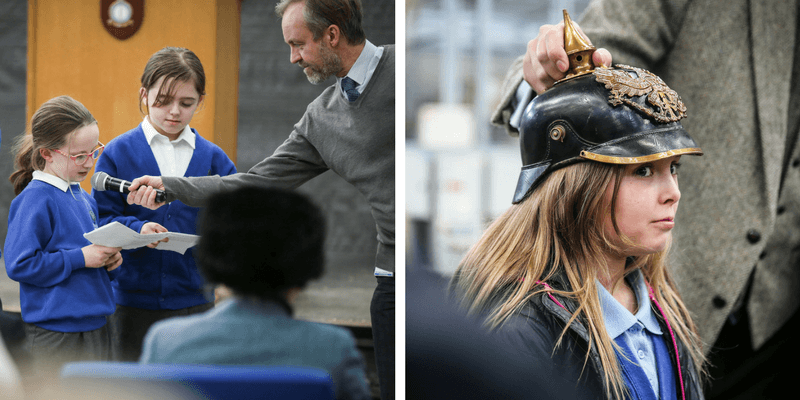 Angela Hobson from English Heritage’s Richmond Castle, talked briefly about art work that could be found on cell block walls in the castle as pupils’ WW1 inspired art competition entries were screened. Year 6 pupils from North Stainley Primary from Ripon then read their original poems inspired by the commemoration of WW1 after Glenn Hearnden had helped everyone understand the nature of Commonwealth War Graves, reminding pupils of the 550 people a day who lost their lives over 4 years during 1914-18 and that we must all avoid war at all costs.

The final schools to present were Brompton-on-Swale Primary from Richmond and Vale Primary from Knottingley who sang their original songs supported by singer/songwriter Bethzienna.

It was a very moving afternoon, in the presence of past and current RAF members of staff and so many young people who have never experienced war but who through the competition have been able to consider the enormity and gravity of it and respond to that through the arts.

In 2018 Never Such Innocence plan to create an album, Songs of the Centenary, a global quest for songs of commemoration, remembrance and unity created by children. The album will be created via a competition with leading musicians creating music and children providing the lyrics. From these songs they will create one Centenary anthem, the Song of the Centenary, a song of unity performed and written in collaboration between children and professional musicians. 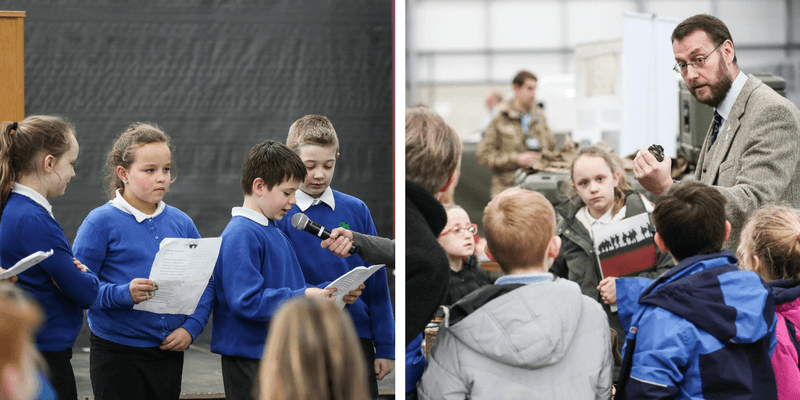 Entry to the competition is done via the Trackd app. Any young person aged 9-16 can write lyrics and add vocals on the theme of WW1 to accompany any of the existing 11 Never Such Innocence tracks created by musicians, or add drums, keys, brass, strings or guitar/bass lines. The app can be downloaded for free onto any IOS (Apple) device. All young people have to do is download the Never Such Innocence track they want to contribute to and then add their own track then post to their feed with the hashtag #sotc to enter the competition. You can find out what to do step-by-step here: https://neversuchinnocence.com/view/songs_of_the_centenary_

Entries to the competition are open until the 31st of March.

Never Such Innocence has also produced a variety of teaching resources on the theme of the First World War and a collection of winning poems. You can access these and find out more at their website https://neversuchinnocence.com