The Embassy for Reimagining Rotherham tasked 30 local children and young people with planning out the future development of Rotherham.

‘The Embassy for Reimagining Rotherham started life in August 2017, when a group of 7 – 14-year-olds was assembled by Grimm & Co, a thriving apothecary that supplies unnatural products and much sought after services to magical beings. But Grimm & Co is also a writing charity, which works across Yorkshire to run innovative writing and story telling workshops that champion the writer in every child. During the summer holidays, Grimm & Co brought together a group of local children and young people to find out what they wanted from their town 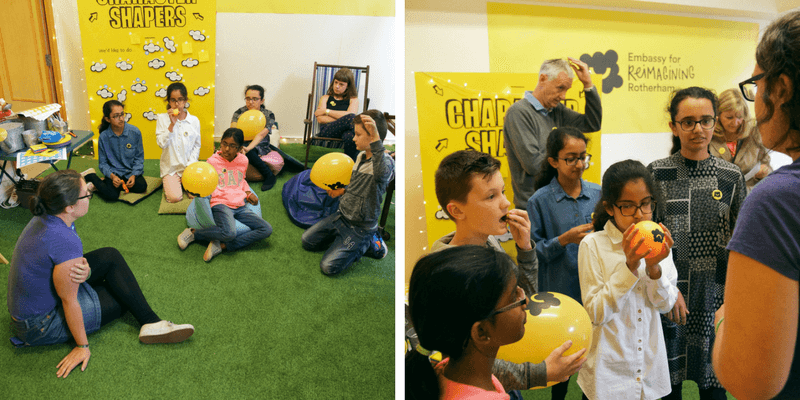 The group took part in an intensive three-week writing programme, during which time the children & young people drafted a manifesto for their town’s future. The drafting process involved the young people thinking about and discussing what the town would be like if they were in charge, reflecting on the things in Rotherham they already liked and wanted to keep and what Rotherham didn’t have that they thought was important.

The group also took part in fun activities designed to get them thinking about broader concepts like money, the economy and social inclusion and how they could be made fairer and better in their vision of Rotherham.

They also took over a vacant shop in the centre of Rotherham and turned it into the Embassy for Reimagining Rotherham. From here they consulted with local people about their manifesto and incorporated their feedback. After much drafting, voting and amending the finished manifesto was presented to a special group of invited guests and can be downloaded and read here.

The team at Grimm and Co have produced a wonderful video that explains the whole process.

We were so impressed with the imagination and execution of this unique idea that we spoke with Sarah Christie, the Creative Learning Manager at Grimm & Co, about the embassy and what benefits it’s had.

IVE: How did the Embassy for Reimagining Rotherham come about?

Sarah: The Embassy project had two key inspirations. Firstly, we are part of the Ministry of Stories (MoS) family. Several years ago MoS ran a fantastic programme called the Children’s Republic of Shoreditch, which saw children creating and running their own country. This included creating the country’s own postal service, spy network, and passports!

Closer to home, the Rotherham local Cultural Education Partnership (RCEP) wanted to do some real, quality consultation with local children and young people about what they wanted from their town’s future, what they most value in Rotherham, and what they would like to change. 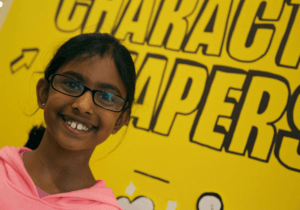 We thought launching a project that asked local children and young people to reimagine their town by creating their own ‘Embassy for Reimagining Rotherham’ would be a great way to do this!

Deborah Bullivant, our founding director, is part of RCEP. She initiated the project, and worked hard to secure funding for it from various sources: Julie Kenny CBE; Arts Council England; The University of Sheffield; IVE; Rotherham Metropolitan Borough Council; and Big Lottery.

Myself and Rosie Huzzard – a research fellow at the University of Sheffield who is also part of the Grimm team, working with us as an external evaluator – then planned the programme, and delivered it over three intensive weeks in August 2017. We were aided in this by the fantastic Side By Side, who worked with the young people to create the Embassy’s brand, which included badges, stickers, flyers, and, most impressively of all, a pop-up embassy in Rotherham town centre!

IVE: In what ways do you think this project will benefit Rotherham and the young people involved?

Sarah:  At the end of the project many of the children spoke about how they had improved in confidence over the course of ERR: both in terms of speaking with their peers and in front of groups of people, and in terms of their own personal confidence in their ideas and their creativity. I was delighted to hear the young people saying that through the project they had learned that no idea is a bad idea – and if ideas are in conflict or there is disagreement, then you just need to work together to find a vision that encompasses everyone’s thoughts. They also seemed to grow from having their ideas listened to; through this project I hope the young people will become active citizens, passionate about standing up for what they believe in and confident that they can make a change. They were certainly all very excited about the possibility of doing more work related to ERR. One young person has already said she wants to be an architect, and was asking one of the architects responsible for the redevelopment of Rotherham for advice! 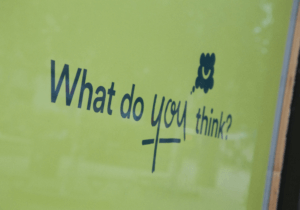 It makes me feel incredibly positive about the future of Rotherham. The young people we worked with were passionate about their ideas and their town. All the children and young people had a deep sense of fairness, and the top priorities in their manifesto were all around ensuring that there are equal and accessible opportunities for all. They also strongly valued the environment and access to green spaces and the outdoors, and thought deeply about what they wanted from their education (which included more time at school, and more practical lessons, such as in first aid and cookery).

It also showed me just how thoughtful, insightful, and capable of debating “big” ideas children and young people are. We discussed the economy, models of government, the education system, and much more – and even the youngest children, who were only seven, had thoughtful, original, sensitive responses to these topics. The participants also loved debating and discussing these issues. Children and young people shouldn’t be underestimated!

IVE: What were the highlights and challenges of the project?

Sarah: We were really keen to ensure that the children and young people’s ideas would be heard by the people who had the power to put them into action. This meant making sure that we struck a slightly tricky balance in the workshops – between on the one hand being fun, active and imaginative, delivering a programme filled with a variety of engaging activities that could empower children who might have low self-confidence or not think of themselves “as writers” to engage; and on the other creating a manifesto that the children were passionate about, full of real and practical ideas about the future of Rotherham. We also had to work hard to ensure that local change makers were able to visit the Embassy itself, which magically appeared in Rotherham town’s centre towards the end of the project, in order to hear the children’s ideas. Change makers are understandably very busy people, but we managed to get lots of key figures (including town councillors, architects, key figures from local museums and theatres, and managers of major local retailers) to attend.

My favourite part of the project was that final week of the project when we had the Embassy in the town centre. Discussing, planning, and refining our ideas in the preceding two weeks was brilliant, but it was such a huge boost for the young people’s pride, confidence and self-esteem to talk to real people about their ideas – and to see how enthusiastically they were embraced! Also it takes a lot of guts to ask a passer-by on the street to answer a questionnaire, and I was so impressed by the young people’s bravery when speaking to people (though they were always partnered with a Grimm & Co staff member or volunteer when doing this, of course; safeguarding is a top priority for us).

IVE: What’s next for the Embassy for Reimagining Rotherham?

The RCEP group, in particular, have been very inspired by the Embassy for Reimagining Rotherham project. The success of ERR, and of other consultation programmes that local organisations have run with young people across the borough, mean RCEP are now developing some exciting strategies for Rotherham to be at the forefront of championing arts and culture experiences for children and young people.

I know all the young ambassadors are really keen to carry the project on, so I’d like to run some more workshops with them in 2018. There are a lot of very exciting possibilities for what we can do next, and I can’t wait to see where we can take ERR in the future!

You can read the completed manifesto here.

If you’re interested in running a similar project within your local cultural education partnership then please contact sarah@weareive.org