IVE recently held 2 Artsmark Celebration Events with schools that have been awarded an Artsmark level to give them an opportunity to talk about their story and meet Arts organisations. Caroline Courtney, one of our project support officers has all the details.

Last week was truly brilliant! We at IVE got together with nearly 150 teachers and pupils and 29 arts and cultural organisations in Hull and Leeds to celebrate Artsmark and the fantastic achievements education settings are making across the region. 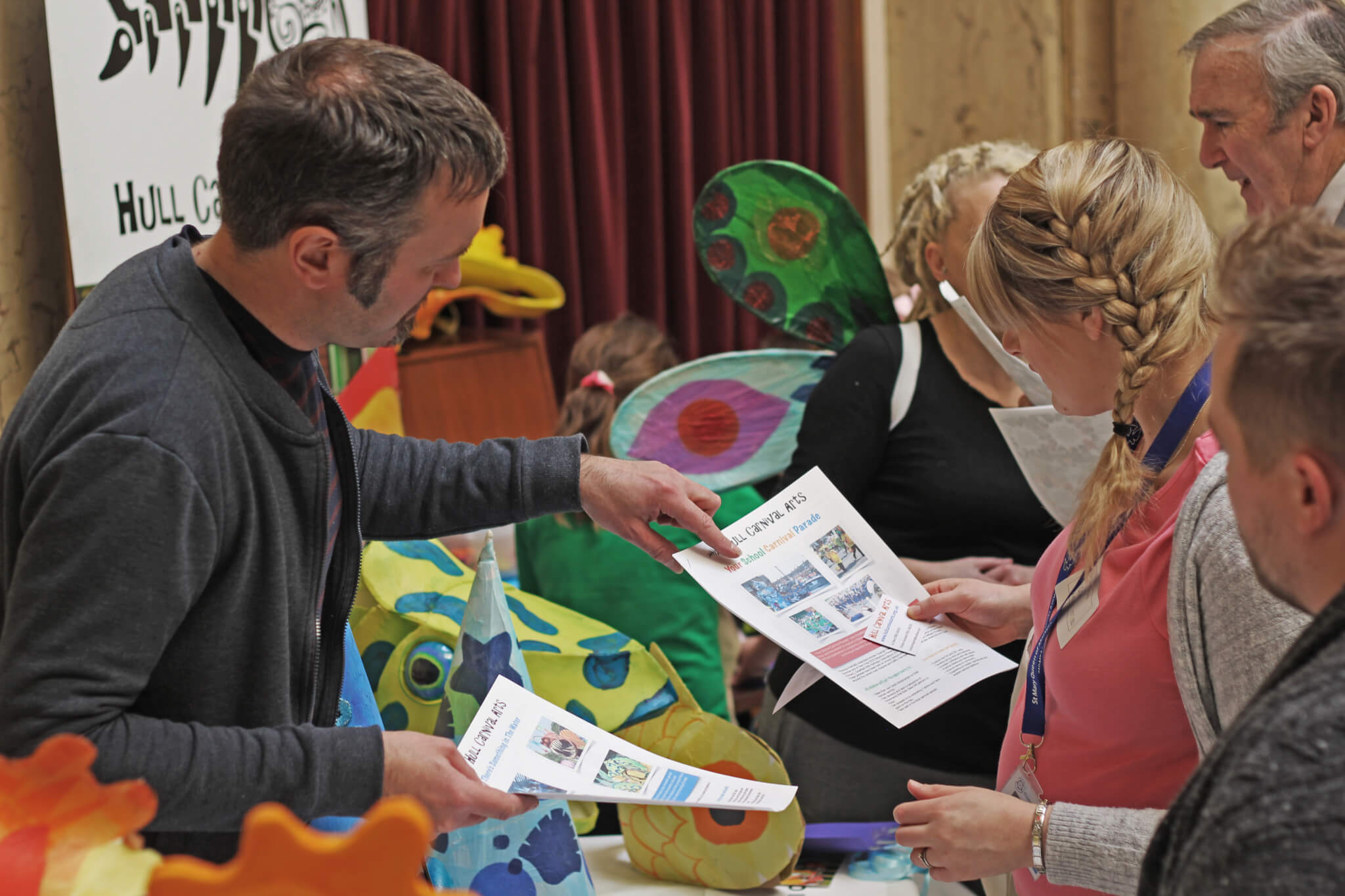 The new Artsmark has been in place since 2015, and with 34 schools awarded a level and over 300 on their journey, it is the right time to say a massive hurrah and showcase the activities, passion and successes that happen in schools every day. What better way to do so than to invite teachers and pupils for tea, juice and cake to meet some of the brilliant arts and cultural organisations who work in their area, listen to an inspiring and giggle-inducing key note speech and get a certificate of congratulations!

On Friday of that week, nearly 80 teachers and students entered through the ornate doors of Leeds Grand Theatre to collect their individual goodie bags that would accompany them throughout the day, packed with light up pens, funky rubbers, colouring crayons and a brand new IVE Creative Story Dice resource. Meadowfield Primary School were the first to arrive and wholeheartedly got into the spirit of the celebrations by bringing along their sketch books to draw in whilst they waited for the marketplace to open! When the beautiful Emerald Grand Hall opened its doors to the schools, organisations like Kala Sangam, Leeds Museums and Galleries, Mud Pie Arts and Impressions Gallery showed everyone a little taster of how they can support schools along the Artsmark journey. Teachers who couldn’t bring any pupils were also able to enjoy a cup of coffee, slice of cake and a chat and make connections with all the organisations (Northern Ballet, Punjabi Roots Academy, Expressive Explorers, Jennyanne Arts, Alive and Kicking, Historic England, National Trust, Opera North and the Geraldine Connor Foundation). The gorgeous hall was soon alive with energy and excitement. 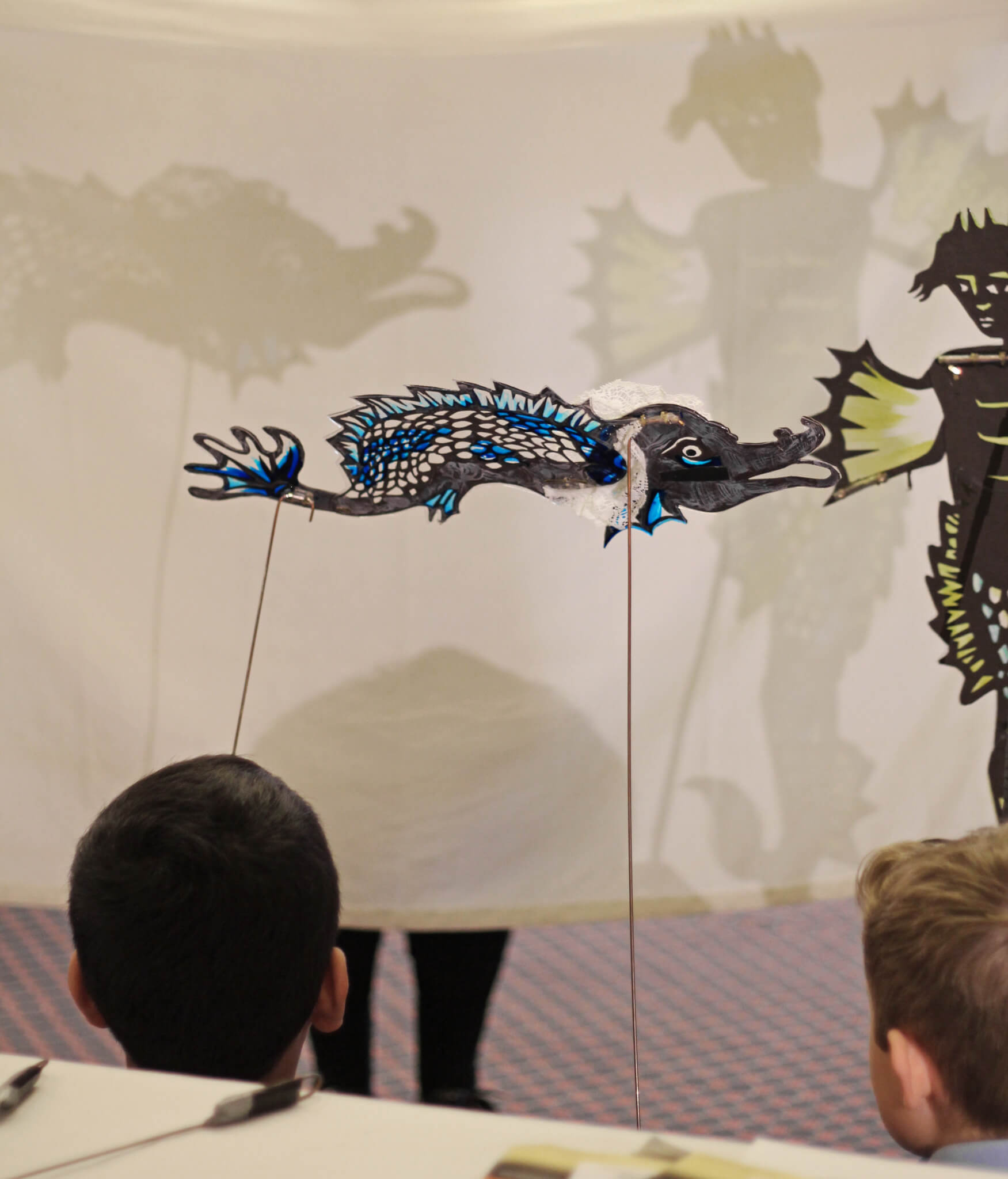 When the marketplace came to a close in Hull, Cultural Education Manager at IVE, Susan Cairns, introduced the celebrated comedian and poet Gervase Phinn who entertained us all with stories of his childhood and schooldays, anecdotes from his experiences as a schools inspector, and inspired the pupils with advice about writing. His top tip was to read as much as you can – otherwise how can you write?! He also cheekily admitted to listening in to other people’s conversations on the train – they always give him ideas for his poems! 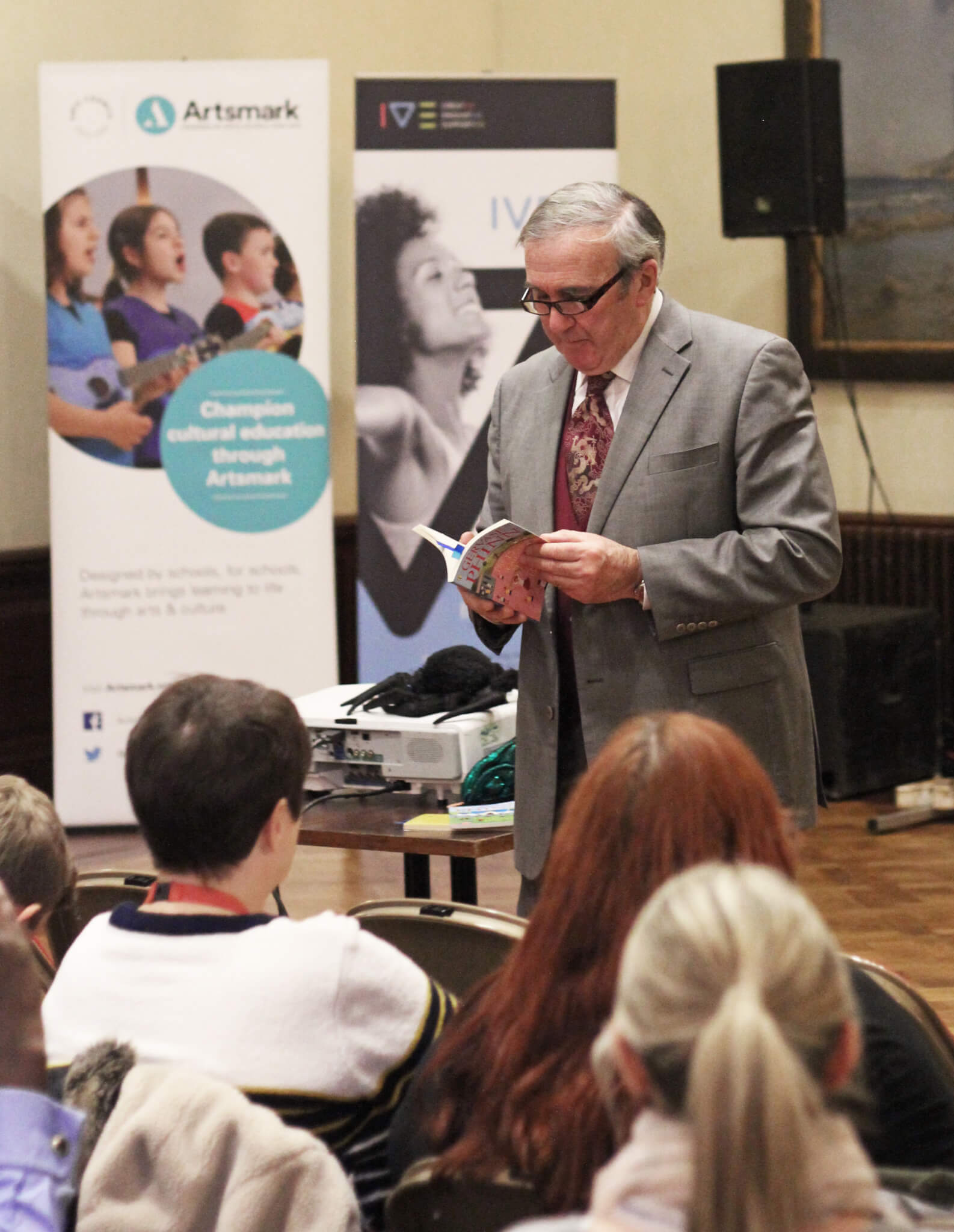 Emma Marshall from Havelock Academy – an Artsmark Platinum school – told everyone about their Artsmark journey and shared this lovely quote from a parent, ‘Havelock’s arts provision has boosted my children’s confidence and changed them for the good…Two unconfident and shy kids have turned into two shining stars!’.

Christopher Holmes, teacher at Artsmark Gold school – and the oldest in Hull – St George’s Primary, shared their whole school music video for Caravan of Love, celebrating their Artsmark journey and ethos of talent, creativity and individuality. There were definitely a few tissues needed at that point! 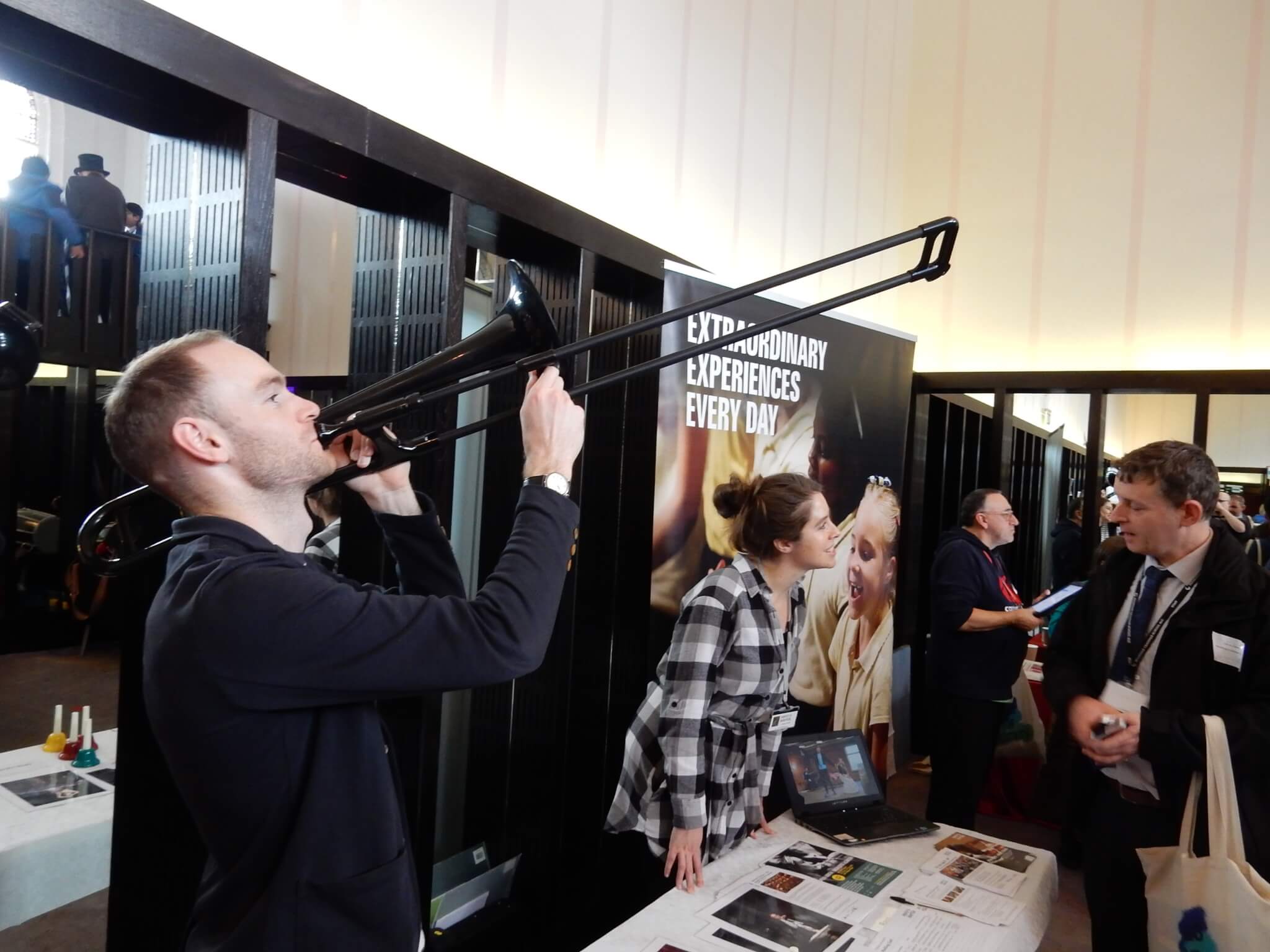 In Leeds, everyone got their seats in the Howard Assembly Room where the fantastic children’s author Jeremy Strong was introduced by Sarah Beckett, Cultural Education Manager at IVE. Jeremy showed us some hilarious pictures, and told us about his childhood – he wasn’t always destined to be a famous writer as he hasn’t always loved books. He didn’t think much of Wordsworth’s daffodils in primary school and Moby Dick was far too heavy, but his epiphany came upon reading ‘Further Reflections on Parsley’ by Ogden Nash, a poem that we’ve reproduced below.

He then realised that writing can be funny! ‘You can play with words! Anything is possible.’ He began to write children’s books when, as a year 3 teacher, he found there weren’t many books his pupils could read on their own…now he has written over 100! There were some young writers in the audience who asked him some very interesting questions – his biggest piece of advice to any young people who would like to be authors or poets is to find somewhere special to write. Nowadays Jeremy has his special shed (‘the studio’ according to his wife), but he used to make a den under his duvet where he wrote his stories. Jeremy’s talk ended with lots of applause as he handed over to the Artsmark levelled schools to share their experiences, challenges and top tips. 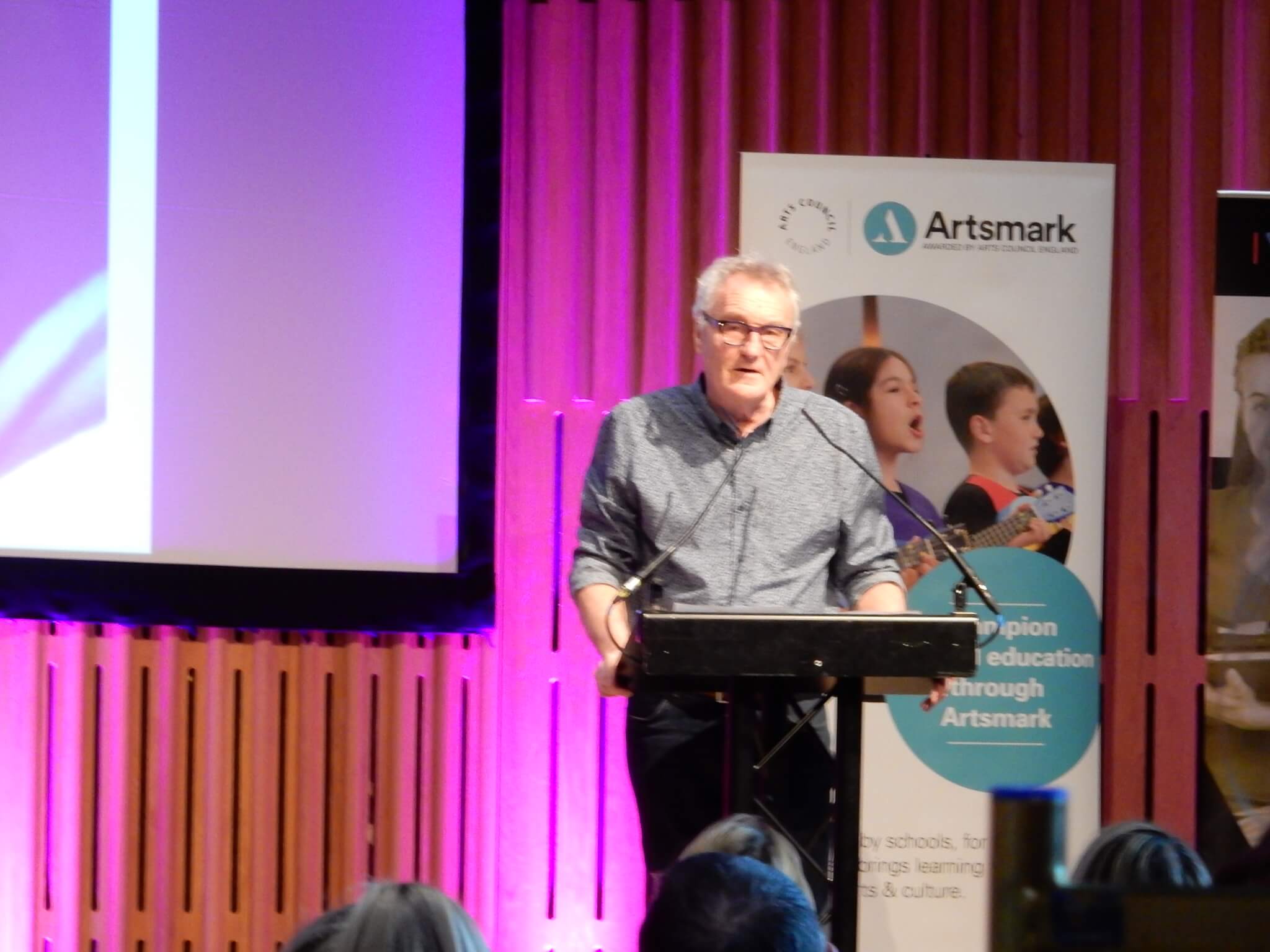 Fred Ellis from Meadowfield Primary Community Learning Centre – Artsmark Silver – emphasised focusing on the current curriculum and working as a team. Anne Dunkerley from Artsmark Platinum Guiseley School shared their journey from the old Artsmark in 2003 – the whole school is now involved in Artsmark in some way! Artsmark Silver school Pentland Infant and Nursery School began their journey with absolutely no music, drama or singing in school, but headteacher Kathy Coates-Mohammed ensured strong links with the community were made to build a culture of trust which led to over 80 parents a pupils attending a performance by Northern Ballet. Ryburn Valley High School’s – Artsmark Platinum – Triestina Bozzo told everyone how their fantastic student Arts Council fed into their Artsmark planning. 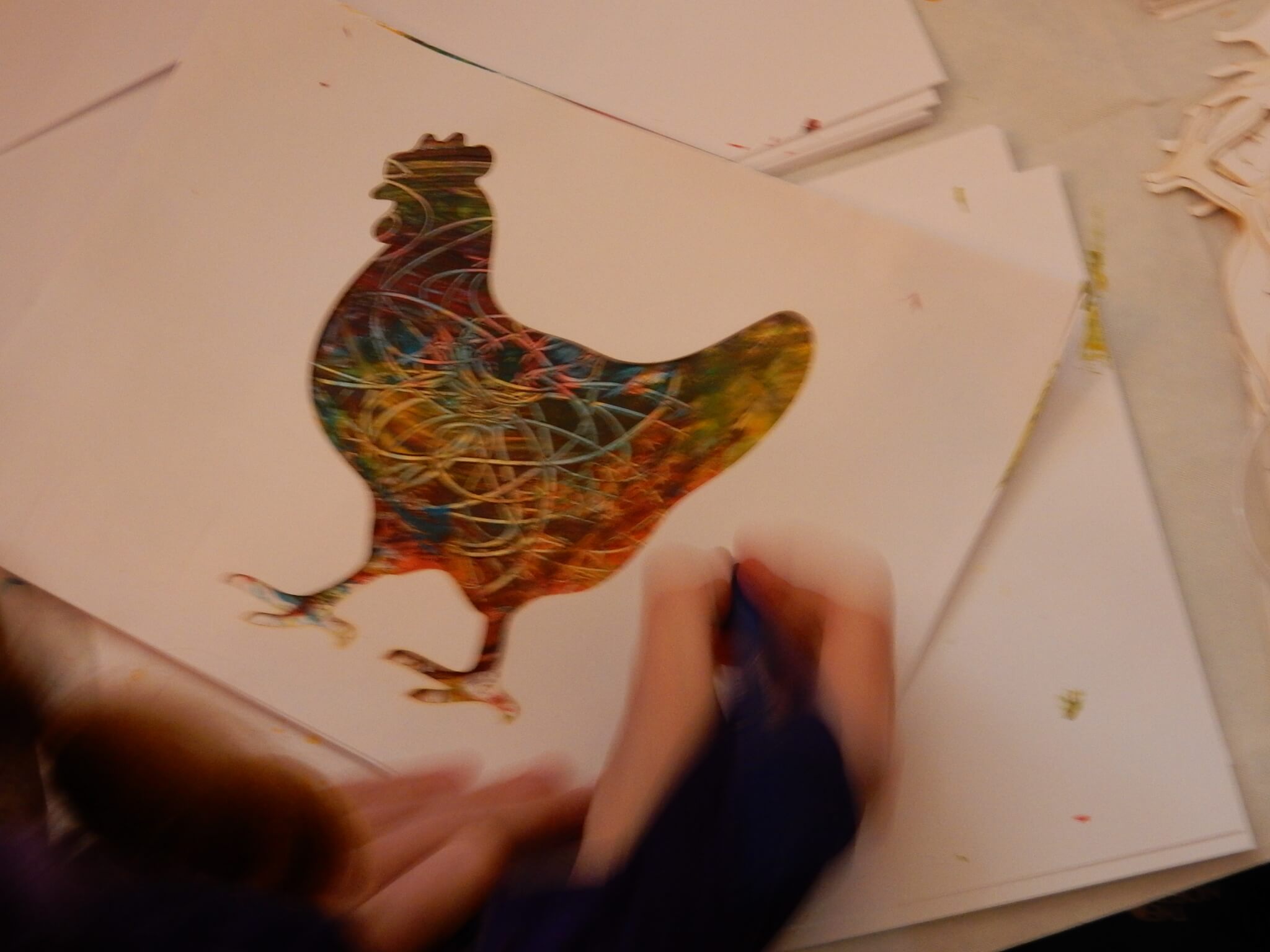 These events were roaring successes! They were firstly a fantastic opportunity to celebrate all schools’ achievements so far: achieving their Artsmark awards, embarking on the journey, committing to protecting their pupils’ access to arts and culture. But also they created space for local, regional and national organisations and artists to meet, talk to and engage with young people and their teachers.

“A big part of our work at IVE is encouraging schools to sign-up to go on the Artsmark journey and to support schools that are already on it. For those that achieve it and are awarded Silver, Gold or the all-hallowed Platinum the least we can do is give them an opportunity to celebrate their achievement and share their story. Achieving an Artsmark not only demonstrates that a school delivers high-quality arts & cultural opportunities for children and young people but that they’re committed to working to continually improve the quality of the arts experiences the pupils are offered too. The arts have proven value; for improving mental health, wellbeing and employability, for improving their academic performance across the board and promoting community engagement and cohesion. During a period when arts in schools are being squeezed due to budget, Ebacc pressures and performance measures, it is truly inspiring to see schools holding true to their understanding of the value of arts and cultural experiences and making the effort to deliver great art, music, drama, dance and more besides in schools.”

Finally a big thank you to Gervase and Jeremy – two successful children’s authors who both credit their schools, teachers and childhood for their love of writing today.

If you’re interested in learning more please visit our Artsmark page, or get in touch at hello@weareive.org to arrange a face to face meeting about how Artsmark could help your school.