Home / Stress awareness and how to support children and young people

Stress awareness and how to support children and young people 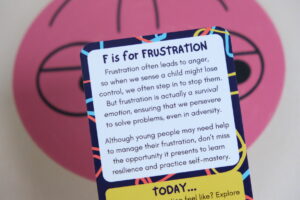 Frustration is usually an uncomfortable feeling. And more importantly, it’s often the predecessor to anger, so when we identify that a child is becoming stressed in this way, it’s quite natural that we step in to prevent them from losing control.


F is for Frustration

And that’s understandable; nobody likes to either experience or be on the receiving end of the ‘emotional hijack’. However, it doesn’t serve anyone, but especially children, when we step into problem-solving territory too soon. As human beings, we actually have an emotional circuit hard-wired into our ‘survival brain’ for frustration.

The frustration circuit is one of seven ‘primitive emotional systems’, discovered by Estonian neuroscientist Jaak Panksepp (who used CAPS to differentiate between these systems and the feeling itself) as part of his work on ‘Affective Neuroscience’.

The presence of frustration in this part of the brain essentially means that this kind of stress is a neurodevelopmental component to our survival. And when you think about it, frustration is absolutely necessary. When a little baby first tries to reach; a skill they’ll soon need in order to eat, and thus stay alive; their arms and hands are all over the place. If that baby just gave up at the first hurdle, and refused to try again, they wouldn’t survive.

In other words, frustration is about mastery. It’s a core component of resilience; the ability to persevere, refine skills and solve problems, even in adversity.

So, while young people may need help to handle it, when we step straight into ‘help’, it can take away the opportunity for them to overcome hurdles, experiment with new ideas, learn from mistakes, refine skills, recover from any lapses in self-control (because that’s inevitable) and try again.

R is for Regulation 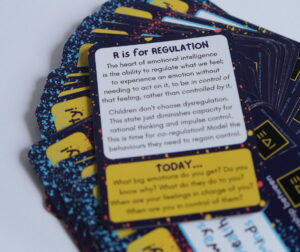 We’re often averse to stressful feelings, trying to shoo them away as soon as they appear.
But when we re-frame them as sources of very useful; albeit, sometimes powerful; information, we can actually make friends with them.

And an unfair thing we often do to children (and ourselves) is react as though they’ve chosen to be emotionally dysregulated. Nobody does. Dysregulation is simply a misfiring brain at work; the survival brain – which is speedy but, because it’s reactive and doesn’t think, often inaccurate – hijacks the capacity for rational thinking and self-control.

But when we help children get to know their emotions; name them, learn about them, understand where they come from, and explore their individual triggers; we give them the tools for emotional regulation. And this is absolutely essential because the simple fact is we can’t effectively manage what we don’t understand.

At the heart of emotional intelligence is:

1) Emotional awareness: the ability to recognise an emotion, name it, understand it

2) Emotional management: the capacity to to experience an emotion without needing to act on it, to stay in control of that feeling, rather than being controlled by it

So next time stressful emotions begin to surface in your learners (and yourself!), see it as an opportunity for them to practice some super-important skills.

Even better, don’t wait until they’re already close to the flight/flight response. The survival brain’s already doing most of the work by then, making learning almost impossible.

Do this NOW! Then, when the time for frustration or dysregulation arrives, they’re already equipped with some tools to self-management, while you have a point of reference to guide and support. 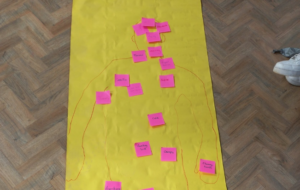 Discuss: What big emotions do you get?

Simply naming an emotion activates the brain’s ‘control centre’. In other words, the brain is better equipped to manage an emotion, simply by giving it a name. Win-win! Use tools like The Blob Tree and Feelings Wheel to help children creatively expand their emotional vocabulary.

Discuss: What does frustration feel like? Explore how it shows up in your mind and body.

Have a child lay on a big piece of paper (an old roll of wallpaper is ideal) and draw round them. Then involve all of your young people in identifying where and how stressful emotions show up.

Do they get butterflies in the tummy? Do they clench their fists or tighten their jaw? Maybe they shout or kick something? Expand the activity to help them explore their triggers. What puts the feelings there? Create a whole group art work from this.

Once children have the basics of emotional awareness, help them discover what they can do to help themselves when those bid feelings come knocking. How do they stay in control of emotions like frustration, so the feeling doesn’t take control of them?

Verbally say thank you for the information?
Politely tell it to go away and leave them alone?
Accept this as a sign to do something else?
Pull out a Wild Card: Time To Reset… Or Let’s Get Curious…
Or a different card; Maybe Acceptance? Decision-Making? Or Yoga or Gratitude or Learning or Novelty…

The possibilities are endless!

Jo Stockdale (Well Within Reach) provides training about brain development, social and emotional competence and wellbeing issues such as resilience and self-esteem. She is the co-creator of IVE’s A-Z wellbeing activity cards.

Sign up to receive a free pack of A-Z wellbeing activity cards here.