As part of Celebrate Artsmark Week, IVE visited Poppleton Road Primary School who have excelled in their Artsmark achievements and been awarded Gold Artsmark for their arts provision.

Sam Dykes, who is the Artsmark lead for Poppleton Road Primary School kindly arranged for Rosi Lister, CEO of IVE, myself, Charlotte Brook, a Project Support Officer for IVE and Nina Baptiste, from Arts Council England, to be shown around the school and witness some of their classes taking part in arts activities. 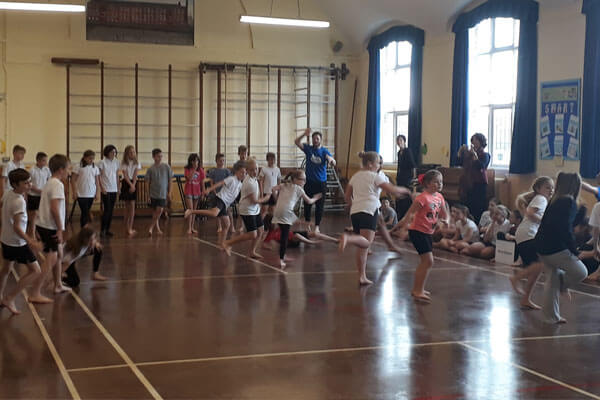 During the visit, a dance workshop with the Yorkshire Dance Festival was taking place in preparation for their performance in a few months’ time. Early years were creating a soundscape with instruments and learning all about conducting and playing as a group. One classroom was sketching the insides of pieces of fruit, while another were practising their phonics with puppets. There was also a wonderful ukulele performance by four of the children, who were singing along and playing lots of different chord progressions at the same time.

Accompanying the visit was special guest Mat Lazenby, Master of the Guild of Media Arts in York. Mat is a key figure in the region’s creative industries sector and has played a major role in developing York’s creative engagement, including the successful bid that made York a UNESCO City of Media Arts. He had this to say about Poppleton;

‘It was wonderful to see such abundant evidence of a school running on creativity, it was evident in the classes we witnessed and clearly finds it’s way into the teaching practice, enriching the lives of the  whole school community – loved the Ukulele’s.’ 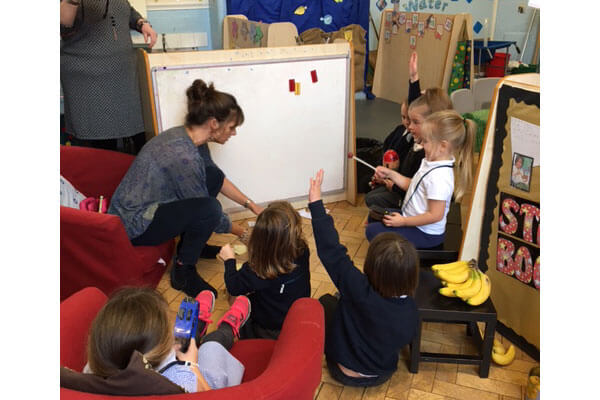 Reflecting on how Artsmark has helped the school achieve such outstanding arts provision, Sam felt that the scheme helped them to enhance an area that the school were already so passionate about in terms of embedding the arts throughout their curriculum. She claimed;

‘it felt like we did the whole thing in reverse, we realised that all the things that we were doing in our curriculum contributed to the Artsmark at quite a high level already’.

For Poppleton Road, their Artsmark journey was all about getting recognition for the amazing work the young people were doing, not only in the classroom but with external arts practitioners in and out of school.

As if on cue, while Sam talked about their successful work with external practitioners, a man dressed as a Viking walked through the door! Apparently he was on his way to a year 6 history lesson! 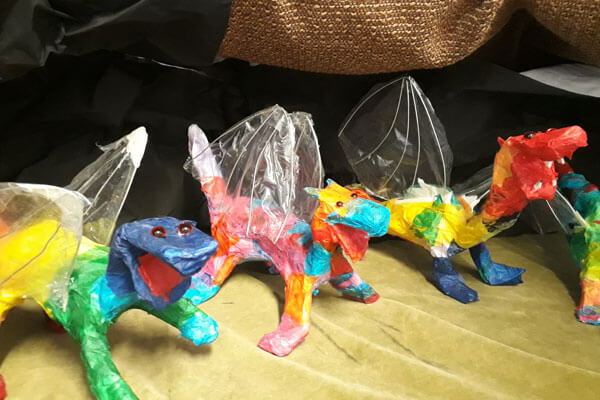 Arts can take on many forms and for Poppleton, making sure this is evident in all subjects is key to making the learning inclusive. Some of their projects with arts practitioners have included an Arts Award pilot with the York Art Gallery, a trip to the Murton Viking Village to learn all about how Anglo Saxons lived, Shakespeare festivals, and their current project with the Yorkshire Dance Festival, to name only a few. In particular, their work with the local Music Education Hub was highlighted as a notable strength by Artsmark and something they wish to develop further in the future.

Having attended sessions regarding good practise, Sam feels that the school is now in a position to be an example to other schools in how they can embed the arts into their whole curriculum. Poppleton are ready to lead the way and hoping to communicate with other teachers to look at how they too can run their school day. It was evident whilst looking around, that the activities we saw taking place, were not staged, they weren’t pre-planned, this was just a normal day at Poppleton School, filled with engaged and excited young children.

I asked Sam whether many of the teachers were arts specialists already but it is more a case that these teachers have worked hard to share knowledge and attend CPD sessions where necessary. For example, the music coordinator has run CPD sessions for the rest of the staff on how to read music and quality singing teaching, so that they are equipped to use music no matter what their specialism. Sam talked about Art CPD that she has attended at York Art Gallery and how this has influenced her art teaching. One of her initiatives is developing the use of sketchbooks, making sure that the children use these as a portfolio rather than just the odd drawing they might do out in the garden. It’s about developing all kinds of artwork such as their printing skills, drawing, painting and having the sketchbook to document their progress as an artist.

Another element to the school’s art provision is their stay, play and learn, which takes place in every year group once a term. This enables parents and carers to come in and join in on some of the activities their children are doing. At Christmas time, for example, this would include some Christmas craft making. This then develops the school’s relationship with the community but, most importantly, gives the children a sense of pride helping to teach their parents a new skill. This school tries to involve the whole community and consistently take part in any citywide events going on. Year 6 recently won the dreamcatcher design competition at the York Minster, with one child’s design becoming a featured presentation. An upcoming performance will be at the local church Harvest Festival where each year group creates and performs a poem collectively. By engaging with poetry, the children can develop their presentation skills, spoken word and English – as well as developing their self-confidence in public situations.

For some of the children in this school, their start in life isn’t always easy and they lack access to arts and cultural opportunities. With quite a deprived area of York nearby, Poppleton aim to give an enriched education and opportunities, which those children would never normally have. Promoting self-esteem is a massive part of their aims for their young people and by engaging with the arts they are able to develop this and become more well-rounded individuals who are able to express themselves creatively and emotionally. As Sam stated, for those children who struggle in school, the arts can help them access their learning in a different way and this is done through the school’s varied teaching style and curriculum.
For Poppleton, Artsmark has supported their ambitions and as Sam commented ‘it’s only made us want to go for Platinum now’. We look forward to even more achievements from this outstanding school and would like to thank Sam for giving us an insight into their arts provision. A huge well done to all the teachers who are engaging with Artsmark and all the children who seem to be going from strength to strength.

If you’re interested in registering your school on the Artsmark scheme, you can find out more on our Artsmark page. Or, come the next FREE Artsmark briefing session in your area and talk with Artsmark experts in person to understand how it can benefit your school.