Wakefield Litfest was created by a partnership called Spark (Wakefield’s Cultural Education Partnership) with the intention of providing young people with opportunities to engage with literature in a festival which was created for and by young people themselves. The young people on the programme board designed and actioned the festival with support from a working board of creative professionals, producing a series of events that reflected what they wanted. 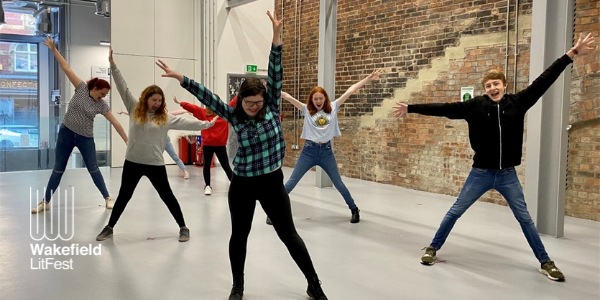 Spark wanted to learn about how to authentically co-produce arts events with young people, giving them the agency to make their own programming decisions.  This would allow Spark’s practitioners to better understand the needs of young people in their work across the Wakefield district and help them to push the boundaries of collaboration with young people.

The funding was granted by Arts Council England and IVE, providing provision for consultation and start-up costs like branding, as well as provision for the events which would be designed by young people. A working group was formed out of the creative professionals from Spark’s network – namely Yew Tree Youth Theatre, Wakefield College, Wakefield Libraries, Theatre Royal Wakefield and Long Division Festival – which would go on to be a source of advice, support and professional connections for the young people in the programme board. Over the course of the consultation period, a group of young people volunteered to become the programme board, who would make the decisions about the festival.

Spark set out with the intention of providing an example of coproduction. They wanted to learn more about how to successfully collaborate with young people.  By handing over the control about decision making to people with less experience, Spark anticipated the events may not be as successful. The project manager provided oversight and advice, but made a conscious effort to maintain the goal of pushing the boundaries of coproduction.

An important piece of context for the festival is that it took place during the COVID 19 pandemic. Lockdown had reduced young people’s access to the arts and the mental health impact led to many young people finding it difficult to motivate themselves to access what they still had available. This also meant that event planning and decision making were going to be affected throughout the festival; as the changing restrictions made it difficult to predict what would be safe.

Spark set out to challenge the way that they work with young people, hoping to learn more about how to collaborate with young people in a way which empowers them. For Spark, it was important to ensure that the young people retained ownership over the festival and the decision making.

Once the programme board was assembled, they accessed a development day. As a part of this they produced a manifesto, outlining non-negotiable, important and preferable goals for both the festival as a whole as well for individual events. While they’d had been given lots of advice about how to approach these aims, the discussion and decisions about what the festival manifesto should be were made by the young people themselves.

These included practical considerations such as staying within budget, social distancing and meeting a broad array of accessibility needs. It also included the non-negotiable aim to challenge the idea of literature, and to create a space to share art free of judgement.

The festival itself consisted of eight of workshops, two open mic nights, a podcast series, a writing competition with the winning entries being made into films, and a social media campaign of book reviews. The majority of these events were online with only the performance workshop being held in person.

“I hadn’t ever read my poems to people this way before so I was a bit stupefied at first, but I loved being there. I loved listening to everyone, of course! I hope you’ll organise more events of the sort. I’ll very much want to join again.” Jayant, Open Mic Performer

The workshops consisted of a variety of topics presented by practitioners recommended by Spark and supporting organisations, selected by the programme board. They included more traditional topics like poetry and short story writing, as well as topics like writing for games and journalism. A part of the festival was a writing competition which had the theme “Myths and Legends” this was linked up to the short story workshop. The winning entries were given feedback and opportunity to redraft, then published as a part of the festivals Zine – which is an independently published booklet, here aiming to provide a physical memento of a very digital festival – and later made into short films. The process of redrafting allowed one of the young people to step into a mentoring role, providing support and advice, as well as helping facilitate communication with the filmmaker. Throughout the festival there were opportunities for young people to take on roles which would be otherwise inaccessible to them.

“Organising a podcast has been an intimidating experience, but a good one. it’s been exciting to learn about the different aspects of producing a podcast. I’ve been trying to make sure I’ve thought everything through, and have a plan in place for the different parts.” Amy – Social Media Producer

The nature of these events had to change to meet the shifting constraints of the pandemic. For example, it was originally planned that the festival would host an in-person campfire storytelling event as a part of the Myths and Legends Writing competition, but this became impossible due to COVID-19 restrictions. There was additionally an attempt at an open mic night based around monologues which was cancelled due to a lack of demand. While making decisions about cancelling events was disappointing, the young people involved did gain a better understanding of the realities of event planning and gained experience in balancing the successes with the missteps.

The festival achieved a solid foundation to build upon. What’s more, the young people who took part in the festival are keen to remain involved as participants, organisers and contributors. There were 97 attendees to events, with 98 young people contributing in some other meaningful way. The success of the events, like the Young Poet’s Takeover, provided a structure and established format that could be use again in future projects.

Additionally, the festival achieved its goal of successfully coproducing with young people. The young people came out of it feeling empowered and confident. They got the opportunity to make their own decisions, including difficult choices about cancelling events, which they wouldn’t have been exposed to otherwise. Even things which in a traditional festival would have been considered failures, provided valuable learning opportunities for both the programme board and the working group.

“It has shown me how to speak and sort of behave and understand terms, and language, used by Arts professionals. I also have been shown different entrances into arts careers that I would have not been aware of prior to this.” Chloe – Programme Board

As a part of the evaluation, the programme board decided there were six key concepts that enabled the successful coproduction, these were “respect – delegation – innovation – communication – imagination – optimism”. The practitioners involved in the festival had to be prepared to take risks and allow the young people to take the reins, communicate clearly with them and trust their judgement. In doing so the young people had the space to come up with exciting new ideas, and the confidence to carry them out. After the festival, Spark hosted a talk based on the success of co-production in Wakefield Litfest, creating a space for local practitioners to share in the lessons learned.

After the success of the festival, Wakefield Litfest have hosted some events as a mini-festival to continue providing arts provision to young people in the area. They also plan to go ahead with a full festival next October, building on the success from the first year. The programme board hope to add additional members to prevent the organisation becoming static, and maintain the energy and innovation that was important to the original festival.

The unfortunate context of the pandemic has also provided interesting lessons. Having to deliver events remotely is something the festival really benefitted from. It gave them the opportunity to develop international connections; working with practitioners who don’t live nearby and having poets perform from overseas. The programme board brought this forward in the summer with a hybrid poetry open mic night, welcoming audience and poets both online and in person.

Overall, the project has been an incredibly successful example of coproduction, forming a model which can be built on. Alongside clear open communication, the key to this success here was the high level of trust the practitioners placed in the young people. By taking that leap, a surprising, authentic, and artistically fulfilling festival was formed. This format of working can allow Wakefield Literature Festival to continue to grow and improve for many years to come. Meanwhile, it has already made changes to the way that Spark works, with the partnership currently running a consultation of Wakefield’s young people in the hopes of forming a programme board for arts events in Wakefield, using the Litfest’s model.