Home / What do the 2018 GCSE and A-Level Results Say About Arts Education?

What do the 2018 GCSE and A-Level Results Say About Arts Education?

2018 GCSE and A-Level results are out and IVE has poured over the data to look at what this tells us about the ongoing state of Arts Education in England.

Starting with A-Levels. The data clearly shows an overall drop in pupils taking arts subject A-Levels at about 10% since last year and 17% over the past two years. Whilst the total number of pupils sitting an A-Level has decreased by 3% over the same period. Numbers are down across every arts subject, unlike 2017 which saw an uptick in Art & Design, but they still show some variation across subjects, with Performing Arts being hit particularly hard.

Worse, year on year drops have actually increased in most subjects so there’s no sign things are improving.

This is the second year since 13 subjects were revised to move all assessment to the end of the course, removing the AS Level for these reformed A-Levels. Many have commented that this could be a factor in the drop in pupils taking arts subjects at A-Level as it limits the number of subjects total that pupils can take in many schools.

Others will point to an increasing pressure to focus on “core” academic subjects such as English* and Maths as well as a push for STEM subjects.

*Despite a heavy push by the Government, numbers of pupils completing an English A-Level have also decreased. It remains in the top 10 most popular A-levels though which are in order; Mathematics, Biology, Psychology, Chemistry, History, English Literature, Art & Design, Physics, Sociology and Geography.

Across the board, attainment was pretty consistent. There is a 0.3% drop in the overall pass rate and a 0.3% drop in A* results but the same percentage overall achieving either A* or A.

In arts subjects specifically though, attainment appear to be generally up in every subject. 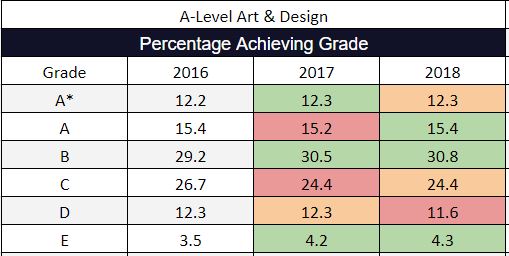 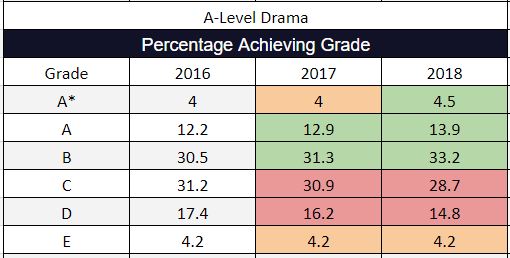 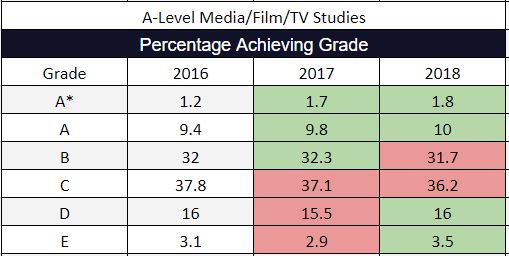 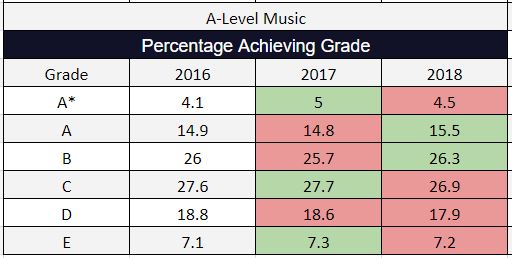 It is possible that the reduction of students taking arts and culture subjects means that those left are the most passionate and talented, pushing up the proportion of high achieving students in these subjects. This is pure speculation however.

What the results do demonstrate is that despite the problems facing arts departments and an increased focus on STEM the quality of teaching in arts subjects remains consistent.

This obviously bodes poorly for future A-Level results as fewer pupils selecting the arts at GCSE means fewer available to progress into A-Level.

However, it’s not all doom and gloom here. Art & Design actually saw an uptick and in Drama and Media/Film/TV Studies the rate of decline has slowed. Only in Music and poor beleaguered Performing Arts is the drop increasing.

Measuring attainment in GCSEs is particularly complicated this year as the majority of subjects have now shifted to the reformed Grade 1-9 model. This is designed to provide more variation at the top level without lowering the overall pass rate. That appears to be the case with the number of pupil’s achieving the highest grade much lower than last year but a fairly even spread across grades 3-7 (with 4 considered the old C).

As such, it is hard to measure the year on year change so we have avoided doing so. Instead, we’ve included the results for the sake of future comparisons. 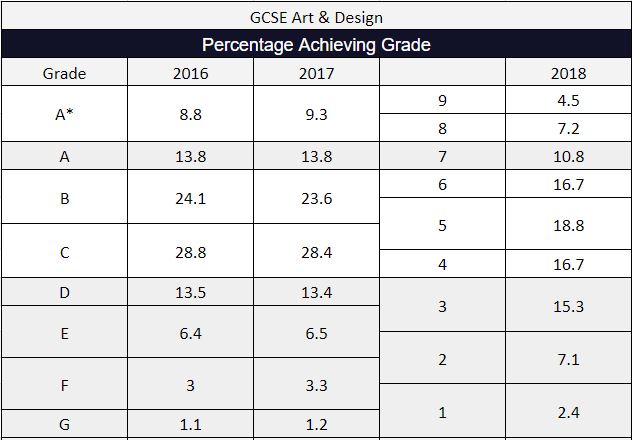 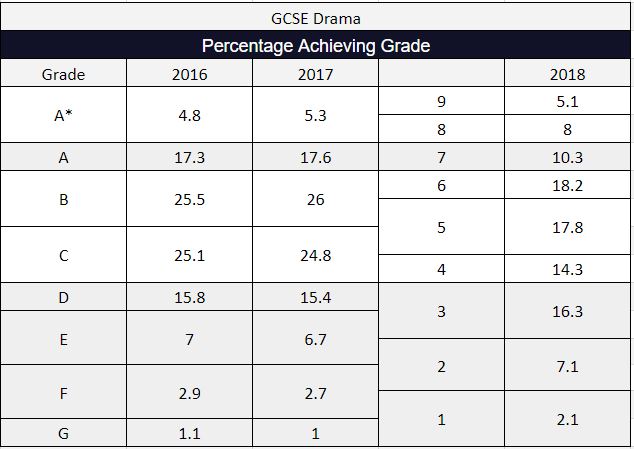 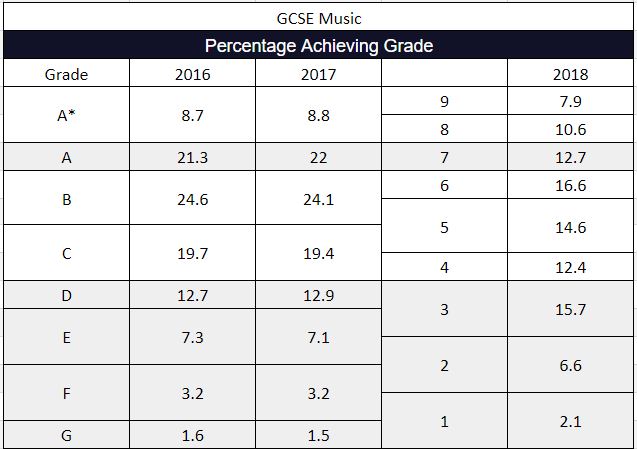 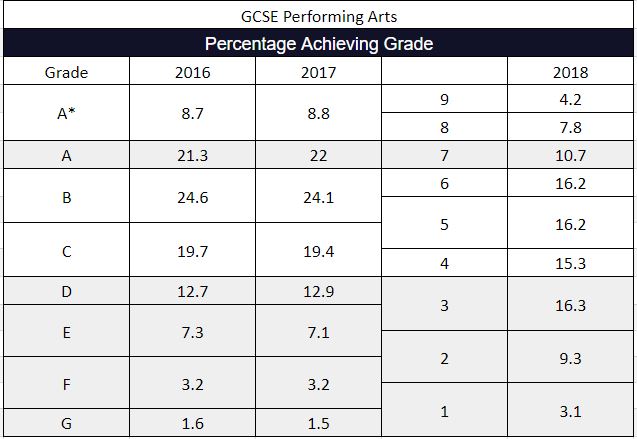 Do These Numbers Matter?

The Government’s response to criticism from the Arts & Cultural sector is that the numbers are relatively consistent and do not show a crisis in the number of pupils taking arts subjects at GCSE and A-Level.

On one level, it is hard to argue that there is an issue when Art & Design remains one of the most popular GCSEs and A-Levels. Certainly, the opportunity to pursue the arts is there if a pupil is driven to do so.

Clearly though, there is a trend of declining participation in arts subjects and this has consequences for the UK’s future.

The drive for STEM ignores the crucial place that the Creative Industries has in the UK economy. The Creative Industries sector is now worth in excess of 91.8 billion (more than automotive, life sciences, aerospace, oil and gas combined) and, according to the Creative Industries Federation’s (CIF) research, is growing at more than double the speed of the wider economy. There is a growing recruitment issue in the creative industries as there are many more roles available than young people with both an interest in pursuing them and the basic skills necessary to begin. This is only going to be exacerbated by Brexit as, whatever the ultimate results, the capacity to fill roles with foreign labour easily will be diminished.

So it’s concerning to see drops in pupils pursuing the arts both at A-Level and at GCSE. Particularly the latter, as it means there’s no improvement in the matter coming for another two years at least.

How Can We Change This?

As we, and others have argued, STEM should really be STEAM. The arts and the skills they teach (such as creativity, problem solving and resilience) are a crucial element in many STEM industries. Scientific Research, Engineering and Software Design all rely on creativity and problem solving skills and thriving industries such as Web Design and Computer Gaming rely as much on talented artists, musicians and writers as they do on programmers.

Many Head Teachers will no doubt be saying that the decline in pupils taking an arts subject is a direct consequence of Government policy. That the introduction of the Ebacc, Progress 8 and Attainment 8 measures, plus the stretching of GCSE to encompass part of Year 9, means that the system is stacked to prioritise non-arts subjects.

This is partly true, but it ignores the fact that there are schools managing to buck the trend and enabling pupils take all of the Ebacc subjects and at least 2 arts subjects as well. While Ebacc and Progress 8 can cause problems, it is within schools’ power to overcome these problems.

One way schools could promote the value of the arts is to adopt Artsmark. Artsmark provides a framework that includes support and advice for schools to enable them to embed arts and cultural opportunities into the curriculum aligned with their school improvement plans.

Another way is to focus on teaching that promotes creative thinking in pupils and encourages a love of learning and an understanding of how to learn instead of focusing purely on what is learned. Our Developing Independent Learners course helps teachers achieve this. It uses fun and creative activities to give teachers a set of principles on which to build their curriculum and new methods and strategies to improve the independent learning capacity of pupils.

On The Other Hand

Whilst this data is increasingly alarming for the reasons laid out here, simply getting more pupils to complete qualifications in the arts doesn’t address deeper, more systemic problems.

In his latest blog, “Why it’s Time to Stop Talking about the Decline of Arts Subjects in Schools” our Business Development Director, Drew Rowlands outlines why we need to shift the debate in relation to curriculum. Specifically, he argues we need to move away from fixed subjects at GCSE that are structured around knowledge and instead focus on teaching that emphasises different skills with wide ranging applications.