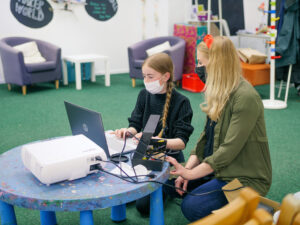 “I learned that I can talk to other people, share my ideas and listen. Loved it.”

Creating a social and collaborative network

Chol Theatre were keen to introduce a Young Producers programme in Kirklees so they approached Evoke – the Kirklees Cultural Education Partnership.

Both Chol and the Children’s Art School had been utilising the Maker World space in Huddersfield and members of their companies had spoken both there and in Evoke meetings about a desire to work together on a programme – and Young Producers seemed like the perfect opportunity.

The Young Producers programme was designed to enable young people interested in creative careers to investigate their individual skills but to do so within a group project. Not only did this align with the broad boxes within the Silver Arts Award – around which the programme was built – but it also ensured a social and collaborative network, which proved essential to the success of the scheme.

“The biggest difference is feedback. If you are doing it yourself, only I can have an opinion on it. But if I’m doing it with others you get creative input from others, like constant feedback.” 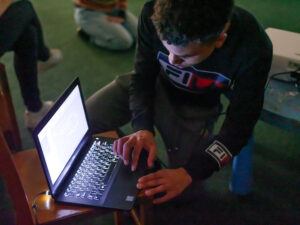 The Young Producers programme was designed to accommodate up to 12 young people from Kirklees and there were a number of fully funded places allocated to ensure that no-one would miss out due to a lack of parental contributions.

The programme was advertised through social media from Chol, Children’s Art School and Evoke and applicants were encouraged to register their interest in a particular role within the creative industries. The 12 places were filled and Chol hosted the initial session, utilising their vast experience of creating a safe space in which the young people could express themselves without fear of judgement. All partners agreed that this was a vital step in the success of the programme.

It was important to all partners involved that this was to be a pilot programme. It is common practice within the Evoke partnership that partners approach each other with ideas and opportunities but there is always one eye on future opportunities for both partners and the children and young people. Thus a new programme like Young Producers might start with a partnership between a theatre company and a visual arts provider but it is the mission of Evoke to see how it can then be replicated between a museum and a film-maker, for instance.

One way in which the programme connected with a wide range of partners was through the freedom for the young people to choose which art avenue to explore. A number of the participants chose to follow their musical passions for instance, and so part of the role of Vicky (Chol), Chloe (Children’s Art School) and Greg (Evoke) was to use their networks to connect these young people with practitioners within Kirklees and the surrounding areas. For instance, one powerful session happened on Zoom where the young people were introduced to a wide range of creatives, most of whom were also from within Kirklees, and all of whom earn a living by pursuing their passions. Another particularly powerful session for instance introduced the young people to Lauren Townsend, herself a young producer, and her youth and dynamism had a lasting effect on the participants; it helped convince them that a future career in the creative industries was indeed a viable option.

“I will explore what an A Level in drama offers, while also looking for starter jobs in creative industries so that I can get used to that environment.”

Inspiring others to take risks 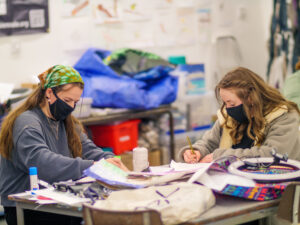 The programme was structured around the Silver Arts Award requirements to fulfil first an individual challenge, then to demonstrate their leadership skills through a group challenge.

The programme had a huge impact on all of the participants. For one boy in particular, he transformed from being someone who was insistent at the start of the programme that he did not want to work with anyone else, to being an inspiration to the rest of the group. He lacked confidence initially but after being nurtured through the early sessions, amazed everyone by producing a brilliant stand-up comedy routine for his individual challenge. This inspired others to take risks and push their comfort zones. His complete emersion in the group challenge drag show highlighted how far he had come. As he said himself,

“[The programme] gave me a better view of what I could do when working with others…with others you can choose different roles that help you develop each other’s skills as well.”

One of the most common pieces of feedback from the participants at the end of the programme was that they felt listened to and had ‘had their say’. The programme was facilitated by Vicky, Chloe and Greg in the truest sense of the word. The young people were not led into a pre-determined set of performances. They were encouraged to follow their interests and passions, and the facilitators worked sensitively and quietly to enable these wishes. This meant that, for each participant, the Young Producers programme belonged to them. As one participant noted, she wasn’t keen on productions at school because,

“…you don’t have a say – the teacher is the director, the costume designer and every other role, you do what they say. Whereas here we got to lead.”

Download the full case study as a PDF here